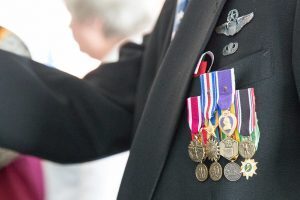 The City of North Charleston will host its annual Veterans Day tribute on Monday, November 11th, 2019 from 10:30 am to 1 pm at Park Circle, featuring Colonel John Dorrian, USAF (ret). Veterans and the public are asked to join Mayor Keith Summey and City Council in this special ceremony. Each year, over 500 veterans in attendance are honored.

All veterans in attendance will be recognized and will receive a specially designed commemorative coin. To receive a coin, veterans are urged to RSVP to (843) 740-5801, (843) 745-1028 or via email at cdambaugh@northcharleston.org.

Prior to the ceremony, from 9:30 am – 10:30 am, a story swap will be held in the Felix Davis Community Center.  Veterans will have an open opportunity to share memories and stories about their service with fellow veterans. The story swap is open to the public.

Lunch for all event attendees will be provided immediately following the ceremony with The Old Tickers performing live music during the luncheon.

Colonel John Dorrian, USAF (ret) is the Vice President for Communications and Marketing for The Citadel, The Military College of South Carolina. Before joining the leadership team at The Citadel, Colonel Dorrian served 25 years in the United States Air Force. His most recent assignment before retirement was as spokesman for Combined Joint Task Force Operation Inherent Resolve, which is the military effort to defeat ISIS in Iraq and Syria. In that role, Dorrian was principal military spokesperson as well as advisor to the task force commander and senior staff with regard to public affairs and communication matters. While deployed in this role, he conducted more than 400 national and international news media engagements.

Before that assignment, he was Director of Public Affairs, Air Force Space Command, Peterson Air Force Base, Colorado. He served as the senior spokesperson and principal advisor to the commander communication matters. In addition, he was responsible for developing and executing global communication strategies to build understanding and support for Air Force Space Command. He worked directly with local, national and international media on coverage of command missions including Air Force network operations; managing a global network of satellite command and control, communications, missile warning and space launch facilities; and space system development and acquisition.

Colonel Dorrian is a native of Jacksonville, Florida. He was commissioned in July 1992 after completing Officer Training School at Lackland Air Force Base, Texas, and was then assigned as the Deputy Chief of Public Affairs at MacDill AFB, Florida. Colonel Dorrian has served as a public affairs officer at the wing, Numbered Air Force, major command, Headquarters Air Force and combatant command levels. He commanded the 305th Mission Support Squadron, McGuire AFB, New Jersey, and also deployed to Kabul, Afghanistan as chief of press desk operations, International Security Assistance Force. Colonel Dorrian also earned his Master’s degree in Strategic Studies at the U.S. Army War College in Carlisle, Pennsylvania.