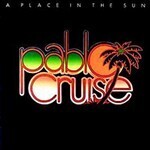 With five Top 40 hits, four decades of recognition, and three original members on board, Pablo Cruise put on one hellacious show Friday night (Nov 8th) as they brought their party atmosphere to the Coastal Carolina Fair. While there were a few in the audience under 30, most of the near 900 in attendance were of the baby boomer generation, and judging by their reaction, the crowd was happy to have the ‘yacht rockers’ in the low country.

Lead singer and guitarist David Jenkins, as well as fellow founding members Cory Lerios (keyboards, vocals), and drummer Steve Price, alongside veteran bassist Larry Antonio entertained enthusiastic concert goers for over 90 minutes, offering up 14 songs, many with extended play. The familiar “A Place In The Sun’ kicked off the evening party. Although concert temps fell into the 50’s after sunset, Pablo Cruise kept the audience warm with their mix of pop, R&B, soul, and island music, not to mention their positive attitudes.

‘Cool Love’ and ‘Raging Fire’ showcased the many facets of the long time band members, who have been rocking stages since 1973. Jenkins thanked the crowd for their continued support over the years, and gave a big shout out to Charleston. But it was the back stories and humor shared by Lerios that kept the crowd in stitches between numbers.

Lerios gave props to the our troops, which in a military town went over extremely well. He shared a funny story about a fan who said he first made love to a particular song by Pablo Cruise, to which Lerios said it was one of the band’s shorter songs. The punchline drew thunderous laughter.

Whether it was Jenkins or Lerios, concert attendees enjoyed behind the scenes details of how the guys came to be, and how they penned many of their songs. A half dozen album cuts ensued including the upbeat ‘Will You Won’t You‘ from 1983’s ‘Out Of Our Hands’.

Every concert number received extended play, with the guys delivering a solid 10 minute instrumental jam session, including a kick ass drum solo by Price, as the other three members carried their tools of the trade into the audience, with Lerios donning a portable keyboard. If you were looking for in your face, working the crowd performances, than Pablo Cruise did not disappoint.

Two thirds the way through their show, Pablo Cruise closed their concert with a non stop hit parade, inviting the crowd to get up and dance to the familiar tunes from the late 1970’s. Although the dance clubs were teeming with ‘disco era’ songs in the late 70’s Pablo Cruise rose to prominence with songs such as ‘Love Will Find A Way’, ‘Don’t Want To Live Without It’,  ‘I Go To Rio’, and their signature hit ‘Whatcha Gonna Do’ which inspired their own get up and boogie sensations on Top 40 radio.

With most of the crowd flooding the front stage area, the evening ended on a high note as the boys turned the fairgrounds into a neighborhood block party. As the music ebbed, the band members greeted several concert attendees, thanking them personally for celebrating their music for over four decades. Pablo Cruise have songs that are indelible and recall good times, and seeing them live only further excites the musical senses. Pablo Cruise have and always will be a party band.