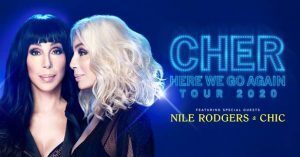 The one and only CHER today added several cities to her “Here We Go Again” Tour’s 2020 itinerary – one of which is North Charleston. The pop icon will perform at the Coliseum on on Friday March 20, 2020 at 8 pm.


Nile Rodgers & CHIC will be the special guest for the North Charleston outing. Tickets go on sale to the general public on Friday, November 8th, 2019 at 10 am, but there are a couple pre-sale options.

Citi is the official presale credit card of the tour. As such, Citi cardmembers will have access to purchase pre-sale tickets beginning Tuesday, November 5th at 10 am local time until Thursday, November 7th at 10 pm local time through Citi EntertainmentSM.  For complete pre-sale details visit www.citientertainment.com.

Tickets are on sale to the general public starting Friday, November 8th at 10 am ET at LiveNation.com, the North Charleston Coliseum box office, and Ticketmaster.com.

Cher is an Oscar, Grammy, Emmy, Golden Globe, Billboard Icon Award recipient, and Kennedy Center Honoree. She is best known for songs like “If I Could Turn Back Time,” “I Got You Babe,” “Believe,” “Strong Enough,” and “Bang Bang (My Baby Shot Me Down).”

The Here We Go Again Tour began September 2018 in conjunction with the release of her Warner Bros. “Dancing Queen” album which landed at No. 1 on the Billboard 200 Charts.

Simultaneous to the announcement of additional tour dates, Cher has just released a new fragrance Eau de Couture, which she has been working on for the last four years. It is available exclusively on ScentBeauty.com.

Cher will also be performing on the season finale of Dancing With The Stars on November 25th.

The legendary singer was supposed to perform at the North Charleston Coliseum in 2014, but had to postpone – and ultimately cancel – due to illness.

Nile Rodgers is a multiple Grammy-winning composer, producer, arranger and guitarist and co-founder of CHIC. Rodgers is best know for his chart-topping hits like “Le Freak,” which is the biggest selling single in the history of Atlantic Records. He was inducted into the Rock & Roll Hall of Fame in 2017 and the Songwriters Hall of Fame in 2016.