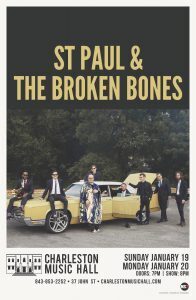 St. Paul & The Broken Bones, the eight-piece rock band from Birmingham, Alabama, will perform at the Charleston Music Hall on Sunday, January 19th, 2020.

The band, which formed in 2012, released their debut album Half the City in 2014 and its follow up, 2016’s Sea of Noise, too much acclaim. Those strong efforts helped the band tour the world relentlessly, including being selected to open for The Rolling Stones, headlining two nights at the Ryman Auditorium, and appearing on television shows like The Late Show with David Letterman, Jimmy Kimmel Live, Conan, Austin City Limits, and The Late Show with Stephen Colbert. The band’s latest release is 2018’s Young Sick Camellia.

Lead singer Paul Janeway’s showmanship and dedication to his performance and the inventive direction of co-band leader Jesse Phillips has made the band’s shows a must-see event.

Tickets to their Charleston show can be purchased here.
–