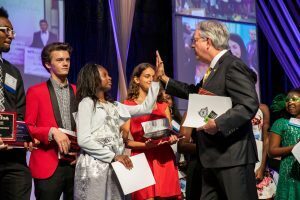 YEScarolina’s 10th Annual Gala was held on the evening of Friday, October 11th at the Gaillard Center, the organization’s biggest fundraiser to benefit its mission to develop opportunity through entrepreneurship. The affair recognized teachers and students from across the state, featured a Student Business Showcase, a live and silent auction, provided by YEScarolina alumnus Illusionist Caleb Alexander, as well as music by the Paul Quattlebaum Party Band. A formal dinner was followed by desserts provided by Butcher & Bee.

This year, YEScarolina awarded the inaugural Paul Hulsey Outstanding South Carolina Student Entrepreneur of the Year to recent Burke High School graduate Tayler Mccray. This scholarship is awarded to a student that shares the resolve, positive attitude, work ethic and commitment to community that Paul Hulsey encompasses as dedicated philanthropist in the Charleston area.

Among the esteemed class of YEScarolina’s ten 2019 Student Entrepreneurs of the Year was Xavier Crook, a student at Fort Dorchester High School. Crook was recognized as this year’s Big Heart award winner for his business, XMC Lawn Care. Presented by Motley Rice, the Ronald L. Motley Memorial Award honors a YEScarolina student who seeks to promote the welfare of others and captures the hearts of those around them.

Teachers were also recognized at the event, with the biggest honor being bestowed on Monica Brisbon of Carolina Forest High School, this year’s 2019 Teacher of the Year. Brisbon has been certified to teach YEScarolina’s curriculum since 2016 and has quickly made an impact in her community since. Shortly before the program ended with announcements of the winners for raffles sponsored by Gwynn’s of Mt. Pleasant and Diamonds Direct, Mayor John Tecklenburg took to the stage to congratulate the evening’s winners and proclaim the date as YEScarolina Day!

This event was YEScarolina’s primary fundraiser of the year, with many respected business owners and leading entrepreneurs in attendance. Funds raised at the gala benefit YEScarolina, enabling this local 501c3 nonprofit organization to provide entrepreneurship training to South Carolina teachers and empower students throughout the state with a meaningful and experiential entrepreneurship education that is relevant to the real world.