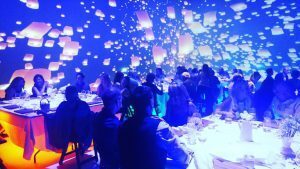 On December 4, 2019, The Underground Kitchen (UGK) returns to Charleston to debut “EnviroDining.” The event is UGK’s second visit to the Holy City – the first official UGK event in Charleston was October 5th at Robert Lange Studios.

UGK is an acclaimed Richmond, Va.-based experiential dining series known for its roving, secretive, themed dinners that pop up across the East Coast. In June 2019, UGK and its team of talented chefs cooked for the first time at the prestigious James Beard Foundation in New York City.

Organizers say “EnviroDining is designed to heighten the palate – and the senses. This multi-course, multi-ethnic gastro-sensory experience virtually transports guests around the world as the scenery and atmosphere change with each course. Featuring a synthesis of food, community, and technology (wall projections, lighting installations, and audio and sound production), EnviroDining represents a tasting tour of the world – and an immersive dreamscape and unforgettable culinary showstopper that you have to see/hear/smell/touch/taste for yourself.”

Click here to purchase tickets. The event location will be announced at a later date.