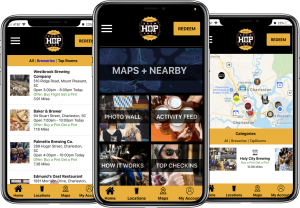 If you love the local craft brew scene, then you’re going to dig the new Brew Hop Pass app, which includes discounts such as “buy a pint, get a pint” at 28 of Charleston’s top breweries and taprooms. The app also includes $8 off axe throwing.

Here’s how it works:

Additional features of the app:

Additional locations will be added in the future.

Learn more via the video below:
–