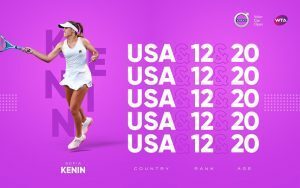 Kenin has found significant success during her 2019 season, winning her first ever career WTA singles and WTA doubles titles. In total, she captured singles titles in Hobart, Mallorca and Guangzhou. She also won the doubles titles in Auckland and Beijing.

“Sofia climbed the junior rankings and has now solidified herself as a true contender and top player in the tennis world,” said Eleanor Adams, Volvo Car Open Tournament Manager. “Our fans have the opportunity to cheer on the future generation of tennis, and Sofia’s fourth appearance in our field solidifies our commitment to always finding and attracting rising stars.”

Outside of Kenin’s titles this season, she also appeared in the finals in Acapulco and the semifinals in Toronto and Cincinnati. She defeated Ashleigh Barty in Toronto and Naomi Osaka in Cincinnati, both of whom were ranked World No. 1 at the time. Additionally, she defeated Serena Williams in the third round of the French Open to reach her best Grand Slam result to date.

As a result of her success this season, Kenin qualified for the 2019 Hengqin Life WTA Elite Trophy in Zhuhai.

“I have had a really amazing season and will be looking to build upon it in 2020,” said Kenin. “I have always enjoyed my time in Charleston at the Volvo Car Open and am hoping to go even further in the tournament next year.”

The 2020 Volvo Car Open will be Kenin’s fourth time competing in the tournament’s main draw.

For more information on the tournament and ticket options, visit volvocaropen.com or call 843.856.7900.