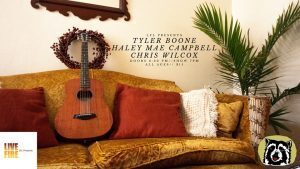 Downtown restaurant Harold’s Cabin will host its final Rooftop Session of the year on Wednesday, November 13th at 6:30 pm. The finale includes artists that all started in Charleston – Tyler Boone, Haley Mae Campbell, and Chris Wilcox.

Boone grew up in the Charleston area and has made his way to headlining major music venues and gaining traction on the radio waves all across the country. He’s opened for such acts as Grammy award winning artist Sheryl Crow, The Avett Brothers, Christopher Cross, Hootie and the Blowfish, Old Crow Medicine Show, Dr. John, and more. He’s also become an official Taylor Guitars endorsed artist.

Haley Mae Campbell’s music video for her single “Oughta Be” premiered on CMT.com in mid-September, and has been one of the most-viewed videos on the platform for over a month. She’s received local and regional radio airplay, and has over one million collective streams on Spotify. Since the release of her first album in 2015, Campbell has opened for country stars including Luke Combs, Brothers Osborne, Dan + Shay, David Nail, Lauren Alaina, Carly Pearce, Thompson Square, Tyler Farr and more.

Chris Wilcox is a singer-songwriter based in Nashville, TN, but he lived in Charleston for five years. His upcoming release will be called Legacy.

The show is all ages and has a $15 cover. There are no reservations for this event. Harold’s Cabin is located at 247 Congress Street.