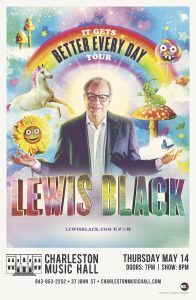 On Thursday, May 14th, Grammy Award-winning stand-up comedian Lewis Black will perform at the Charleston Music Hall at 8 pm.


Black is one of the most prolific and popular performers working today. He came into national prominence with his appearances on The Daily Show in 1996. Those appearances led to comedy specials on HBO, Comedy Central, Showtime, and Epix.

He has performed for audiences throughout Europe, New Zealand, Canada and the United States. In 2012, he performed eight sell-out shows at Richard Rodgers Theatre on Broadway.

He has released several comedy albums, including the 2007 Grammy Award-winning The Carnegie Hall Performance. He won his second Grammy Award for his album Stark Raving Black and has published three bestselling books: Nothing’s Sacred (2005), Me of Little Faith (2008) and I’m Dreaming of a Black Christmas (2010).

Follow us
Related Topics:charleston music halllewis black
Up Next