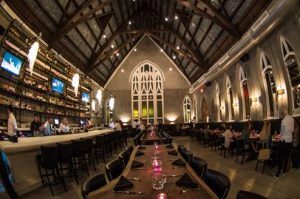 At a separate oyster station, Chef Lynch and McMillan will be creating and serving a signature oyster dish. Attendees will also be treated to a welcome complimentary cocktail and passed hors d’oeuvres.

Starting at 8 pm, brother and sister musical team Lawrence will perform with their live eight-person band, followed by a live DJ. A portion of the evening’s proceeds will be donated to the MUSC Shawn Jenkins Children’s Hospital.

Reservations are highly recommended and can be made at www.5ChurchCharleston.com or by phone at 843-937-8666.