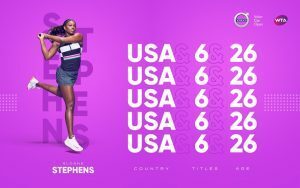 “It’s no secret I love to play in Charleston,” Stephens said. “I started competing in this event at 18 years old and I still enjoy going back each year. My favorite surface is clay, and it’s always fun for me to play a clay event in the States. And, the Volvo Car Open has great crowds who are so supportive of me, so that’s an added bonus!”

Stephens met friend and fellow countrywoman Keys in the 2019 Volvo Car Open quarterfinals, with Keys ultimately winning the three-set battle. The two have competed head to head for the past three years – also meeting in the 2017 US Open finals and 2018 French Open semifinals.

Stephens has won 6 WTA tournaments in her career. In addition to reaching the quarterfinals in Charleston, her 2019 season includes making the fourth round at the Australian Open, semifinals in Madrid and quarterfinals at the French Open.

The American will play the Volvo Car Open for the eighth time in April 2020.

“Sloane is a player our fans love to rally around and cheer on loudly,”Eleanor Adams, Volvo Car Open Tournament Manager, said. “As a past champion and a talented competitor, she is an exciting addition to our growing player field!”

For more information on the tournament and ticket options, visit volvocaropen.com or call 843-856-7900.