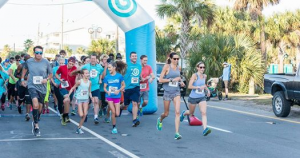 This year’s run/walk will take place at the Folly Beach Fishing Pier along the Atlantic Ocean. The race is scheduled to begin at 9 am and will feature a variety of activities for all attendees. The pet-friendly event will include a kid’s zone and much more.

According to the Lung Association’s 4th annual Lung Health Barometer, awareness about the impact of lung cancer in women is extremely low. Even though lung cancer has long been the #1 cancer killer of women, lung cancer is not a top-of-mind health concern for 97 percent of women. Every day, more than 400 friends, neighbors, and loved ones lose their lives to lung cancer, with a new diagnosis occurring every two and a half minutes.

In South Carolina, approximately 4,360 women and men are diagnosed with lung cancer each year, and on average, only 46.7 percent of women with lung cancer will be alive one year after diagnosis. With one of the lowest survival rates compared to other major cancers, early detection and treatment is key to saving lives. However, screening is currently underutilized, as estimates indicate that less than 5 percent of high-risk Americans have been screened for lung cancer. LUNG FORCE educates and empowers patients and healthcare providers and raises critical funds for research into better early detection methods and precision treatments for lung cancer.

The American Lung Association offers several resources for individuals and families that have been impacted by lung cancer. Anyone seeking help can visit LUNGFORCE.org or call the Lung Association’s toll-free Lung HelpLine at 1-800-LUNGUSA for information, resources and support services. Visit Lung.org/lung-cancer for comprehensive education and support developed specifically for lung cancer patients and caregivers.

Registration is open to individuals and teams beginning at $30. For questions about participating, donating, sponsoring, or volunteering at a LUNG FORCE Run/Walk, contact Margaret Ann Youngs and Rebecca Balitsaris at CharlestonEvents@Lung.org or 843-556-8451.