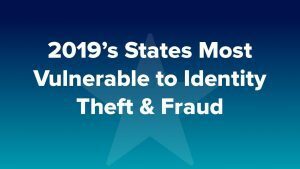 Personal finance website WalletHub last week released its report on 2019’s States Most Vulnerable to Identity Theft & Fraud and South Carolina was listed as the fifth most vulnerable in the country.

To determine where Americans are most susceptible to such crimes, WalletHub compared the 50 states and the District of Columbia across 15 key metrics. The data set ranges from identity-theft complaints per capita to average loss amount due to fraud.