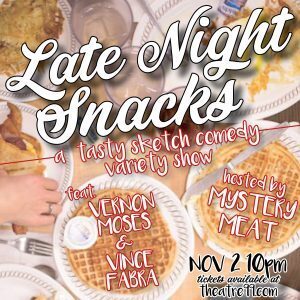 “Late Night Snacks” is a tasty sketch comedy variety show served up by Theatre 99 and Mystery Meat, the dynamic comedic duo of rapper BLKPAPA (Jordan Scott Edwards) and his trusty DJ White Smoke (Joshua Christian). The show welcomes invited improvisers, stand-up comedians, musicians, actors, and writers to perform new original material, from sketches and characters to improv and stand-up. No show is the same, but you’ll definitely be glad you came. The next show will be Saturday, November 2 at 10 pm at Theatre 99 (280 Meeting Street, above the Bicycle Shoppe).

“We’re always excited to team up with exciting local acts while bringing our brand of entertainment to our friends at Theatre 99,” says Christian. “We love ridiculous comedy in all forms – sketch, improv, stand-up, etc. That love is represented in the guests we choose and fully displayed in our songs and sketches, and it has definitely resonated with our audiences across the southeast.”

November’s lineup will feature brand new material from Mystery Meat. Invited guest Vince Fabra will do stand-up comedy, and Vernon Moses (Deshawn Mason and Jon Antoine) will be performing sketch comedy. Additional acts may be added to the lineup, and the lineup is subject to change.

Vince Fabra is always trying to be on some type of stage. At Theatre 99, he improvises with groups like Meeting Street Maniacs and Thank You, Next! You can also catch Vince perform stand-up comedy in showcases all over Charleston. Lastly, Vince is a professional speaker, traveling to campuses and conferences around the country, sharing humor and dropping knowledge at each stop. For more info on Vince and all of those different stages, check out vincefabra.com.

Late Night Snacks will be served at 10 pm on Saturday, November 2nd at Theatre 99. Tickets are $8 and can be purchased at theatre99.com or at the door.