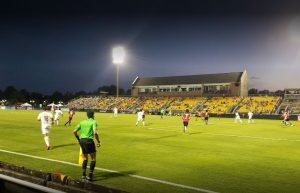 An historic game took place in the MUSC Health Stadium at the weekend, as the Charleston Battery made their final appearance there.

The stadium was sold for $6.48 million in May, to a property developer based in Atlanta. Reports suggest that it will soon be knocked down and replaced with a range of residential and commercial properties. However, there was still time for one final goodbye to a stadium that is filled with 20 years’ worth of memories.

If it is true that Charleston does not have any major teams in either NFL, NBA regular season odds, MLB or MLS, their soccer team is one of the oldest in the country. As one of the two oldest soccer clubs in the country to have operated continuously since starting up, the Battery has a lot of history behind it.

The team from Charleston debuted in 1993 and in 1999 they moved into their new stadium in the city.

At this time that they played their first games here, it was called the Blackbaud Stadium. Their move here made them the first non-MLS team in the US to build their own stadium. Regular followers and anyone who enjoys the sport will know that they have had their fair share of ups and downs since then.

Of course, it has also played host to a wide range of different events over the years since 1999. These have included the USWNT, music concerts, and community events. During that time, it has been famous for the fantastic atmosphere inside it, the popular pub, and the collection of soccer memorabilia.

The presence of alligators in the nearby swamps added an extra degree of unique appeal to this place. It should also be pointed out that solar panels were fitted here a few years ago, in a far-sighted move to offset carbon emissions.

It was also home to a 3,000 square feet jumbotron that was the second largest in the Southeast. In fact, when looking at its size compared to the number of seats in the stadium, it was said to be the biggest video board in any stadium on the planet.

The opponent for this last game at the stadium was Bethlehem Steel. Some 1,500 spectators ignored the wet conditions and the arrival of Tropical Storm Nestor to witness this historic soccer match.

The home team said goodbye to their stadium with an emphatic 5-1 victory. It was an emotional day, as many former players returned to the stadium to witness a season-best score line with a dominant offensive performance.

Because of this move, the Battery won’t have their own home stadium to play games in for some time. However, the truth is that they wanted to move closer to their urban fans and millennials in the area anyway. They are now expected to look for a new home closer to the downtown area.

There has been talk of the team returning to play their games at Stoney Field. This field in downtown Charleston is owned by the city, and it is where they played their early games before building their own stadium.

In the long-term, this place isn’t a viable option, for a number of reasons. This is why there is a renovation project going on at Stoney Field just now. Rumors suggest that the Battery may contribute to the multi-million-dollar cost involved, to make sure that they have a place for them guaranteed there.

It isn’t yet clear how far along this process it. Bearing in mind that it could take some time to gain the necessary approval from local authorities, it has been suggested that they could play at the Johnson Hagood Stadium at The Citadel military academy next year.

An announcement of where the Battery’s games will be played in the future isn’t expected until the end of the current season.

Letter to the Editor: In Support of Mayor John Tecklenburg

How to Improve Your Sex Life with These Unique Toys?