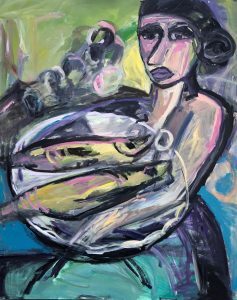 The paintings in Anne Darby Parker’s upcoming solo exhibition, Fish and Figure, feature her signature female figures along with a new subject for the artist — fish.  The semi-abstract series allowed for an exploration of gesture drawing, painting, and expression.

Parker says the idea for the body of work came organically — accidentally, in fact. “When I was stepping back from the easel, I kept seeing fish shapes that I had not consciously drawn. The fish were not designed but rather they evolved. The more I considered the idea, the more natural the series seemed because of my work with figures and my family’s heritage with fish. My grandfather was a fisherman; I was raised around the Lowcountry oceans and marshes, and my husband and I chose to raise our family here as well.”

Some paintings include fish painted with clear intention (fish being served on a platter, for example); in others, fish shapes are hidden among the marks. “I love how the figures and the landscape integrated into each other,” Parker says. “This series was a challenge that called for bigger canvases, broader marks, and bolder colors. Each piece depicts a powerful and strong female figure, which I think complements the delicate and intricate nature of fish.”

An opening reception will be held at Meyer Vogl Gallery on Wednesday, November 13th, from 5 pm to 7 pm, with Parker in attendance. The exhibit will run from November 13th to 30th.

Follow us
Related Topics:Anne Darby ParkerMeyer Vogl Gallery
Up Next

Free Kids Halloween Fest to be held at the Citadel Mall