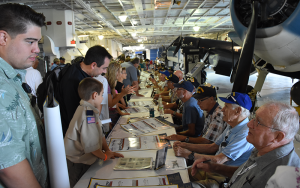 During the 71st Yorktown Association’s crew reunion from October 16th to 19th, Patriots Point Naval & Maritime Museum visitors will have an opportunity to meet several USS Yorktown crew members who were aboard the historic aircraft carrier when it recovered the Apollo 8 space capsule.

The reunion will feature six World War II veterans, three of whom were members of Air Group 88 aboard the Yorktown in August 1945. The group was in the midst of an air patrol on August 15, 1945, when a cease-fire was issued that signaled the unofficial end to the war. While flying back to the Yorktown, Air Group 88 was attacked by 15 to 20 Japanese planes. Four of the Yorktown’s pilots were killed during this last aerial attack of the war.

The battle is the topic of author and popular historian of the Pacific War John Wukovits’ new book, Dogfight Over Tokyo. Wukovits will be aboard the USS Yorktown on Saturday, October 19th, and will participate in the veteran meet and greet from 9 am to noon. Copies of his book will be available for purchase.

Yorktown Association Reunion events open to the public include:

Thursday afternoon aboard the USS Yorktown in the Smokey Stover Theater, Yorktown Association will host a discussion about family relationships and the experiences of crew members while on the aircraft carrier.

Saturday morning, the Yorktown Association will host a meet and greet session for museum visitors.  Crewmembers participating will represent all significant U.S. conflicts that the aircraft carrier served in.  Several World War II veterans who were members of Air Group 88 will sign autographs alongside author John Wukovits who has written a book about Air Group 88 and how four men in their air group were killed during the last aerial battle of World War II, after the cease-fire was ordered.

Meet crew members of the USS Yorktown who were aboard the aircraft carrier in December 1968 and helped recover the Apollo 8 space capsule and crew after it orbited the moon and returned to Earth.  College of Charleston’s NASA Space Grant Consortium will provide hands-on activities for children including an exhibit that features rare moon rocks.  A film Patriots Point Naval & Maritime Museum produced with Apollo 8 crewmember Jim Lovell will play in the museum’s Smokey Stover Theater.

All Yorktown Association Reunion events are included in the regular price of admission. Parking is $5.

Patriots Point Naval & Maritime Museum, on the Charleston Harbor, is the #1 attraction in Mount Pleasant, S.C., and is home to a fleet of National Historic Landmark ships, and the only Vietnam Support Base Camp in the U.S. Patriots Point is also headquarters to the Congressional Medal of Honor Society and the agency’s official Medal of Honor Museum. Visit www.patriotspoint.org for more details, or find us at @patriots_point on Twitter and Instagram, and Facebook at www.facebook.com/PatriotsPoint.org.

About the USS Yorktown Foundation

The USS Yorktown Foundation is a 501(c)(3) charitable organization dedicated to raising funds to provide scholarships for educational programs at Patriots Point Naval & Maritime Museum, as well as supporting new exhibits, symposiums and special programs. The Foundation’s mission is “to cultivate a unique learning environment that connects generations by celebrating America’s history and its heroes, inspiring freedom, patriotism, leadership and service.” For more information, please visit www.USSYorktownFoundation.org or call 843.881.5925.