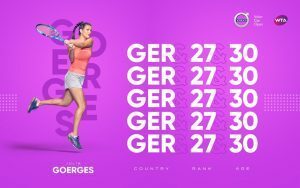 Bertens and Goerges met in the final match of the 2018 Volvo Car Open, where Bertens was ultimately victorious. They currently hold a 2-2 head-to-head record and recently played one another in the US Open’s third round, with Goerges winning that match.

“It’s a great feeling getting to welcome beloved players back to our tournament,” said Eleanor Adams, Volvo Car Open Tournament Manager. “Kiki and Julia are two of the most talented players on tour, and they’re also two of the kindest. We are thrilled to host them again next year. Who knows – maybe one or both of them will appear in our final again!” 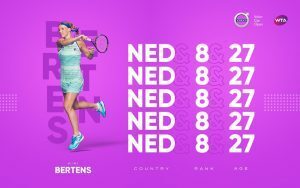 World No. 8 Bertens ascended into the WTA’s top 10 months after winning the 2018 Volvo Car Open. She has remained a fixture in the top rankings since her victory in Charleston. Bertens has won two tournaments in 2019, bringing her career wins to nine.

So far this year, she has captured the titles in St. Petersburg and Madrid, reached the finals in ‘s-Hertogenbosch and Palermo and reached the semifinals in Sydney, Stuttgart, Rome, Eastbourne and Beijing. The 2020 Volvo Car Open will be Bertens’ fifth time competing in Charleston, where she holds a 9-3 win-loss record.

“I always enjoy playing in Charleston and look forward to the tournament even more since winning the title,” said Bertens. “I have been working really hard on my game and am hoping to be back in the final of the Volvo Car Open next year.”

Goerges earned her seventh career title this year in Auckland. She also reached the finals in Birmingham, quarterfinals in Doha and the fourth round of the US Open in 2019.

She is the 2018 Volvo Car Open finalist and a 2011 quarterfinalist. The 2020 Volvo Car Open will be her seventh time competing in Charleston, where she holds a 9-6 record.

“The Volvo Car Open is one of my favorite tournaments. I have had good results in Charleston and love playing in front of such a fun and supportive crowd,” said Goerges.

For more information on the tournament and ticket options, visit volvocaropen.com or call 843.856.7900

College of Charleston Students Are Fired Up About New Blacksmithing Class