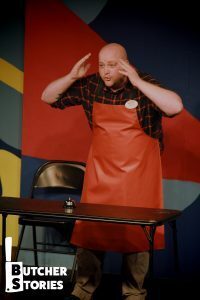 Based on the book by John D’Agata and Jim Fingal, The Lifespan of a Fact play premiered on Broadway in 2018 starring Daniel Radcliffe, Cherry Jones and Bobby Cannavale. Adapted for the stage by Jeremy Kareken & David Murrell and Gordon Farrell, the three actor play stars PURE Core Ensemble members Joel Watson, Erin Wilson and Paul Rolfes and is directed by Core Ensemble member, Christy Landis. Estimated run time is 70 minutes with no intermission and will run from October 31 – November 23, 2019.

Jim Fingal is a fresh-out-of-Harvard fact checker for a prominent but sinking New York magazine. John D’Agata is a legendary writer with a transcendent essay about the suicide of a teenage boy—an essay that could save the magazine from collapse. When Jim is assigned to fact check D’Agata’s essay, the two come head to head in a comedic yet gripping battle over facts versus truth. The New York Times called The Lifespan of a Fact “terrifically engaging and fascinating…it’s what you call a good time” while the Wall Street Journal called it “a smart, rib-bustingly funny play!”

Also, running for four performances every Sunday from November 3-24, 2019 at 5:00 pm is Thanksgiving themed Butcher Stories by Andy Livengood.  Butcher Stories has been featured on eBaumsworld.com and theChive.com with production credits at The Piccolo Spoleto Festival (presented by PURE Theatre), The Foothills Comedy Festival and The Norfolk Comedy Festival. The Post and Courier called Butcher Stories “well-written and funny, raising the bar when it comes to one-man shows.”

Alex is a directionless twenty year old kid who spends his days manning a meat counter at the local grocery store. When an unexpected promotion falls into his lap, Alex must decide if he wants to follow his dreams or take on the stable career as a butcher. Based oﬀ of real life events pulled from a 20 year career behind the butcher’s counter, comedian Andy Livengood (Winner, Charleston City Paper’s Best Local Comic) will play upwards of 30 characters and take audiences on a hilarious and heartfelt tour of strange coworkers, clueless managers and crazy customers. Whether you’ve worked behind a service counter or only shopped at one, this show will leave you in stitches.

Tickets for The Lifespan of a Fact and Butcher Stories are on sale now at puretheatre.org and at the PURE Theatre box office. Tickets range from $10-$35 for The Lifespan of a Fact. Tickets range from $10-$20 for Butcher Stories. Advance purchases for both are strongly recommended. In an effort to make attendance as accessible as possible, PURE will offer a number of opportunities for accessible ticket rates throughout the run, including two Pay-What-You-Will performances on Thursday, October 31  and Wednesday, November 6 at 7:30 pm. There currently are no Pay-What-You-Will performances scheduled for the limited holiday run Butcher Stories. The regular $15 student ticket rate and a limited number of $10 tickets (limit two per purchase) will also be available for each performance on a first come, first served basis. To purchase 10 for $10 tickets, please use the code “welcome” on PURE’s website at puretheatre.org or call the box office at 843-723-4444.

Additional information about both productions can be found on PURE’s website at puretheatre.org or by calling the box office at 843.723.4444 Tuesday through Friday 12:00 pm – 6:00 pm and two hours prior to curtain on performance days. PURE Theatre is located at the Cannon Street Arts Center, 134 Cannon Street and has a complimentary parking lot adjacent to the Arts Center for performances.

Join The Freak Show on Friday at The Purple Buffalo