Cast & Crew Offer Up Stellar Performance In This Timeless Production 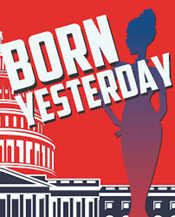 The comedic stage presentation ‘Born Yesterday’ has been a crowd favorite since first introduced back in 1946. The politically infused farce spawned two successful movies, including a 1950 release with Judy Holliday, and the 1993 remake with Melanie Griffith in the title role. With the fair complement of actors it is comic genius, and apparently Footlight Players found the right mix, as they offer up over two hours of raucous theatrics derived from Garson Kanin’s original 1940’s adaptation.

When smooth talking and shady businessman Harry Brock decides to bring his showgirl mistress Billie Dawn to Washington D.C., he quickly finds out her naivety is more of a hinderance to his dirty dealings, than it is an advantage. To save face Brock hires a journalist to help educate his lady friend on the ways of the world. However, too Brock’s misfortune, Dawn’s accelerated learning has made her weary of his ill-gotten intentions, devising her own plan to thwart any bribery between Brock and a congressman. Whether it’s 1946 or 2019, the premise rings the same, often politics and corruption go hand in hand.

‘Born Yesterday’ is meant to be a dramatic hoot, and Footlight Players under the direction of Carolyn Kennedy Graupner breath jocular life into the stage play. In making her debut at Footlight Graupner promises to take the theatre company to the next level, and judging by the performance she is well on her way. The ensemble cast are simply a delight. With nearly a dozen characters I will focus on six principals in the production.

Mild mannered MUSC physician by day, Paul O’Brien is a tour de force thespian by night. With many stars on his acting resume, O’Brien is superb as Brock, the unsophisticated rube who finds solace in rubbing people the wrong way when he’s not buying their affection. O’Brien plays him on the money, as the larger than life, loud mouth thug unaware of his own shortcomings.

Making her 10th appearance at Footlight, Kelly McDavid is sinfully delicious as Billie. McDavid totally immerses herself in the period piece role. She plays the dumb blonde with every ounce of sass and sex appeal. Like O’Brien, McDavid has many stellar performances to her credit, but with ‘Born Yesterday’ she has upped her game. Simply put she is the theatrical impetus in the stage play, and the glue that holds the production together. She holds her own in a testosterone driven play, using her ‘va-va-voom’ to command attention.

Co-founder and executive director with 5th Wall Productions, Jason Olson marks his first time on the Footlight Stage, and is ideally cast as Paul, the idealist newspaper man who discovers there’s more to Dawn than just her looks. Olson and McDavid share many touching cat and mouse scenes.

Richard Latham does a nice job filling the shoes of Ed Devery, a buffoonish lawyer who has fallen from grace. Latham who has appeared on numerous stages throughout the low country, is quite adept to taking on supporting roles. He and O’Brien work well together. Phillip Cingolani makes his sophomore appearance at Footlight and turns in a top notch performance as Harry’s hired hand Eddie. Rounding out the principal players, US Navy veteran Greg Tompkins is proficient in the role of Senator Hodges, a meek and mild politician motivated by monetary greed. He portrays him with subdued reverence. The always lovely Sara Allende is justly represented as Mrs. Hedges. She depicts her has both genteel and reserved. A nice wedded pairing.

Charleston is a strong theatrical city with an abundance of actors committed to their craft. Seldom do you see a production as entertaining and fluid as ‘Born Yesterday’. The cast mesh together like none I’ve seen in recent years. Footlight’s presentation is flawless. Even from the audience you can sense the camaraderie among the performers. Two plus hours of shear enlightenment.

Not to be outdone Emma Scott and her team with Charleston Costume Design do an impeccable job of dressing the cast. Great 1940’s suits for the men, and outfits for the ladies. Just superb. And double kudos to perhaps the biggest star of the night, set designer Ken Barnett for assembling a detailed vintage, art deco, upscale Washington DC hotel room. Attention to detail was exquisite. The surroundings further enhance the overall immaculate production.

Given its story line ‘Born Yesterday’ is a classic tale, and Footlight Players do theatrical justice to the time honored stage play. Whether it’s 1946 or modern day the underlying theme in ‘Born Yesterday’ remains steadfast. Cast and crew at Footlight deliver a four star presentation. If you enjoy live theatre, this one is a must see. Weekend performances running at the Queen Street Playhouse through Oct 27th.

PURE Theatre Announces Two Comedies in November: “The Lifespan of a Fact” and “Holiday Remount of Butcher Stories”