The Lowcountry got a double shot of classic rock n’ roll on Wednesday (Oct 9th) night as two bands with a combined 95 years of music turned the million dollar tennis court of the Volvo Car Stadium into a retro era rock club. Celebrating 50 years together ZZ Top, along with veteran rockers Cheap Trick (45 years) took an overflow crowd on a trip to yesteryear celebrating some of the finest songs to grace FM radio during the 1970’s and 80’s.

Fans experienced two of the hardest working bands in rock n’ roll, with both coming from different auras. ZZ Top is perhaps the best three piece unit in rock music. They are tight, and a perfect blend of roadhouse blues meets hard rock. Their mix of Texas boogie and straight ahead rock n’ roll has kept them at the top of their game for five decades.

Not to be outdone, Cheap Trick personifies the ideal punk rock garage band who just know how to kick ass. They are without a doubt one of the best live bands in the history of pop music. While Cheap Trick don’t have as many Top 40 radio hits as their touring partners, they remain a classic rock group that has and always will be best seen live.

Cheap Trick moved through 14 songs with fluid precision, opening their 75 minute set with album cuts ‘Hello There’ and ‘How About You’, before covering The Move’s ‘California Man’. Lead singer Robin Zander gave a big shout out to all the ladies in the crowd as he and the boys dove into ‘Southern Girls’. Nearing the midway point their cover of 1950’s classic ‘Ain’t That A Shame’ brought the crowd to their feet, with many singing the chorus in unison.

Alternative and punk rockers in the audience were elated to see bass guitarist Tom Petersson get funky, and take over the vocals on Velvet Underground’s ‘I’m Waiting For the Man’. The 1967 New York City club hit for Lou Reed’s band took Cheap Trick back to their roots. 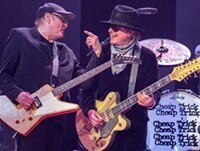 Lead axe man Rick Nielsen kept the crowd enthralled donning a new guitar for every song. By the time the guys met the three quarter mark they ripped into a trio of crowd favorites leading off with their only chart topper, ‘The Flame’. With Rick’s son pounding the drum kit like a veteran, Zander offered up the familiar precursor to ‘I Want You To Want Me’.

Concert goers were rockin’ the stadium by that point, and continued as their hit medley segued into ‘Dream Police’. By then you could feel the electricity in the air under the moonlit night. The boys sandwiched in ‘Never Had A Lot To Lose’ off their 1989 ‘Lap of Luxury’ album before an epic finale that included ‘Surrender’ and ‘Goodnight’. Cheap Trick no how to open and close a performance, and judging by the reaction from the crowd, fans are still ready to rock n’ roll as long as the band hits the road. 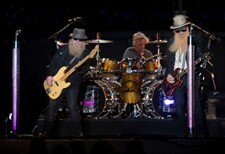 Giving concert attendees enough time for a potty break and a cold beer, ZZ Top took the stage 20 minutes later in prolific fashion. With a giant screen backdrop giving way to close up shots of the boys, and providing vintage cowboy movies clips, as well as classic music videos, ZZ Top ripped through an arsenal of classic rock radio hits that kept the audience on their feet for nearly 90 minutes.

With Frank Beard so effortlessly beating on an oversized drum kit, the bearded duo of Billy Gibbons and Dusty Hill walked on stage going full throttle into ‘Got Me Under Pressure’. Their iconic cover of Sam & Dave’s ‘I Thank You’ kept the rockabilly blues train rollin’. They followed with two killer album tracks in ‘Waitin’ For the Bus’ and ‘Jesus Just Left Chicago’.

Much like Cheap Trick, ZZ Top are a well oiled machine. The same three guys over 50 years have become masterful musicians, who just know how to play off each other. They quickly jumped into a triple play of signature songs, with ‘Gimme All Your Lovin’, ‘Pearl Necklace’, and ‘I’m Bad, I’m Nationwide’ turning up the volume inside the stadium. With the big screen adding fuel to each song’s fire, the boys were just getting settled in.

The trio got funky with ‘I Gotsta Get Paid’, bringing southern rock blues into ‘My Head’s In Mississippi’, with Gibbons interjecting South Carolina for the locals. The boys followed with a old Merle Travis number made popular by Tennessee Ernie Ford, as they put an alternative spin on ‘Sixteen Tons’.

I’m guessing that many ZZ Top fans easily related to ‘Beer Drinkers & Hell Raisers’. When Gibbons flipped his guitar it read BEER on the back side. Clearly ZZ Top know how to host a Texas roadhouse party. After ‘Just Got Paid’, the guys waxed nostalgic with ‘Sharp Dressed Man’ and ‘Legs’. With classic video clips playing in the background, and their signature fuzzy white guitars strapped on, ZZ Top revisited the early days of Music Television, aka MTV.

The first of two encores gave concert goers the locomotive guitar sounds of ‘La Grange’ followed by the crowd favorite ‘Tush’. After a shorter pause for the cause, the power pop rock trio who embrace many genres of rock music, closed with Elvis Presley’s ‘Jailhouse Rock’. Freakin’ awesome.

ZZ Top and Cheap Trick are without a doubt two of the coolest bands to ever emerge during the baby boomer rock n’ roll era. Putting them on tour together is shear genius. The combined musicianship and live concert theatrics make for one kick ass show. Many in the crowd I spoke with came from hours away to witness rock gods. Here’s hoping both bands have many more rockin’ years ahead of them.

Extra Chill Fest Moves to The Royal American for 2019