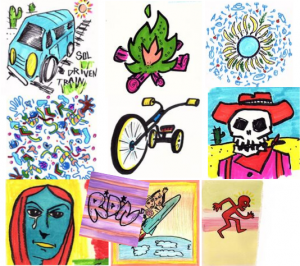 Sol Driven Train will release their new studio album, Ridin’, on November 29, 2019. The ten-song collection is the band’s tenth independently-released studio album and arrives as they look toward 2020, Sol Driven Train’s 20th year together.

The recording took place at Charleston Sound during a period of transition and uncertainty for the band. The band said that over a decade of non-stop touring had “strained their lifelong friendships and wreaked havoc back at home.”

“We wanted to get back to the original spirit of Sol Driven Train – friends simply getting together to jam and express our musical ideas together,” guitarist/vocalist Joel Timmons said.

Saxophonist/vocalist Russell Clarke added, “Recording an album can be a very regimented process. You have a limited amount of time and money to get a certain number of specific songs laid down. With Ridin’, we really were open to whatever happened in the studio. We had ideas we wanted to work on without any preconceived notions of what the album needed to sound like or what songs needed to be on it. Some of the tunes were already written and some of the tunes got the chance to be explored from a small idea into what you hear on the album. Ridin’ was a chance to get weird and have a blast together in the studio.”

Three singles will be released in anticipation of the album drop. On October 4th, “Gettin’ the Band Back Together” and “Banana Fridge” hit the digital shelves, while the title track comes out on November 1st.