Guitarist With ZZ Top Sees No Reason To Call It Quits, Despite 50th Anniversary Tour 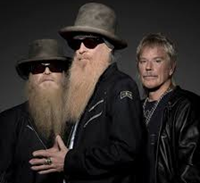 While their 2004 induction into the Rock n’ Roll Hall of Fame solidified their now 50 plus years in the industry, it was their 1970’s and 80’s iconic music that garnered ZZ Top legions of fans and worldwide acclaim. With help from the early MTV generation Billy Gibbons, Dusty Hill, and Frank Beard became one of the most recognized and respected power rock trios of all time, blending blues, boogie, and Texas roadhouse sounds.

By the mid 1980’s they were in full stride riding the success of 1983’s ‘Eliminator’ including four Top 40 hits ‘Gimme All Your Lovin’, ‘Legs’, ‘Got Me Under Pressure’, and ‘Sharp Dressed Man’. All received heavy MTV video rotation. They would score multi-platinum status again in 1985 with ’Afterburner’, with ‘Velcro Fly’, ‘Rough Boy’, ‘Stages’, and ‘Sleeping Bag’ adding to their arsenal of hits.

Fast forward to 2019, and the boogie-woogie Texas trio are out on the road in support of their golden (50th) anniversary tour. While many of their fans have long retired, lead singer, guitarist, and founding member Billy Gibbons says the guys never thought of the band in that frame of mind. 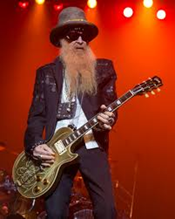 “Not exactly, we started by simply looking toward the next gig, gals, free beer, recording more tracks and, most importantly, exploring new opportunities and vistas in “la comida Mexicana” perhaps better known in some quarters as Mexican food. We just wanted to keep doing it and that’s what we’ve done without a timetable.”

While Gibbons spent 1969 jamming with other musicians, any combination that didn’t include Beard and Hill was short lived. “The previous rhythm section didn’t really last more than a couple months. Once I locked in with Frank and then, at his suggestion, Dusty, it was set. We all knew it was right and always wanted to continue playin’ them blues!”

Five decades later that spark has garnered ZZ Top millions of fans worldwide, with their songs still played in heavy rotation on classic rock radio. According to Gibbons, the band charted success without necessarily giving into the pressures of the entertainment business, allowing them to make records their own way. He admits they enjoy what they do and with fans coming out, that is all motivation they need.

“We’re not sure they (recording industry) take us seriously, which is more than all right. We certainly do have a good time and that’s on top of our list, keeping the good times coming. A byproduct is generations of people keep coming out to hear it turned up and to get down. And now it’s five decades deep.”

With easily recognizable guitar riffs, and rockin’ melodies, many in form of double entendre, ZZ Top’s songs have become a soundtrack for many baby boomers. As one of their principle song writers Gibbons says the band follow a simple rule when it comes to song selection. “The one angle toward songwriting we always pose is “is it ‘funky?’. When the answer is yes, we’re happy. Otherwise, we keep peeling the onion until it’s ready.”

With so many career highlights spanning 50 years, Gibbons admits a couple standout. “Certainly induction into the Rock and Roll Hall of Fame. The icing on that cake for certain was being inducted by Keith Richards. I mean, that’s like a kind of coronation. We were named Official Heroes of the State of Texas which is also something particularly special.”

Gibbons could have easily added spending time with the great Jimi Hendrix, of who he has fond memories of. “Wonderful warm almost shy guy. He was very generous in terms of discussing certain techniques, quite a few of which are not sustainable by mortals such as myself. On stage he was wild but off stage he was all smiles.”

Other artists he or the band especially enjoy jamming with are among the greatest axe slingers of all time. “Any time spent in the presence of Jeff Beck is, by definition, time well spent. We feel the same about Buddy Guy and Jimmie Vaughan.” 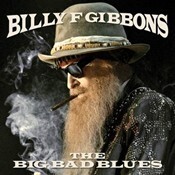 While ZZ Top is his claim to fame, Gibbons has found time to work on solo projects. Last year he won Blues Rock Album of the Year for ‘Big Bad Blues’. “Blues is the root of it all.”

It was another blues icon that put the fire in Gibbons’ belly. “I attended a B.B King recording session, thanks to my entertainer Dad, when I was about eight years old. It was, as they say, a “eureka’ moment. I just thought, that’s it. That’s what I’m gonna do, and spent the next few years figuring out how to do it.”

Musicians and car lovers would no doubt be envious of his two collections. “There’s a whole book about this titled “Rock + Roll Gearhead” by yours truly. I kind of shine a light on parts of those respective collections (cars & guitars).”

One hotrod & axe stand out. “Obviously, the Eliminator car, our co-star or, really the other way around, for many of our videos is an eternal favorite. No guitar has ever surpassed “Pearly Gates,” the ‘magic’ 1959 Les Paul Standard that the Gibson folks replicated a few years ago.”

ZZ Top continues as a collaborative effort with Gibbons one of the chief songwriters. 50 years down the road Gibbons asserts being on stage is the bands first love. “I suppose we’d have to say performing, since we do so much of it. We’re usually out on the road from early spring to late fall.” 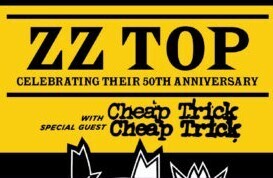 Gibbons may not cruise into Charleston in any of his classic hotrods, but he, his guitars, and ZZ Top will perform their classic hits, on their 50th Anniversary Tour live at Volvo Car Stadium on Wednesday October 9th. Show time is 6:30pm with special guest Cheap Trick (celebrating 45 years). Frankie & the Witch Fingers open the show. Tickets still available.

Fans of Billy Gibbons can catch him on Paul Shaffer’s new show ‘Plus One’, available on AXS Television. The episode runs Sunday Oct 6th. Check local listings for air times.