Toby Keith has been a country superstar for over two decades, and Saturday night at the Volvo Car Stadium on Daniel Island, a near sell out crowd proved they are still in love with the all-American guitar slinging, cowboy crooner. For over two hours Keith unleashed an arsenal of songs paying tribute to party atmospheres, patriotism, and his laid back country life style. For those who were hoping for vintage Toby Keith, they were not disappointed.

For nearly 25 years Keith has worn his anthems on his sleeve, and is not afraid to salute the red, white, and blue, our military, American values, all wrapped up in iconic country music songs. He proved that and more with a short video prior to emerging on stage. The footage capsulized his time entertaining the troops. Like whiskey in a oaken barrel, Keith has aged well, and is a shot to be savored.

Current American Idol winner Laine Hardy opened the show, letting the crowd know that although he’s just 19, he’s ready to bring back southern rock and R&B to country music. With not many songs in his own arsenal, Hardy opened with ‘Can’t You See’ from the Marshal Tucker Band, adding several familiar classic during his 40 minutes on stage. He rocked on Chuck Berry’s ‘Johnny B. Goode’, and got bluesy with Bill Wither’s ‘Ain’t No Sunshine’. The cover songs got many singing choruses.

A cross between yesteryear and upbeat country, Hardy easily set the tone for the main attraction, offering up a couple he’d written since hanging his hat in Nashville, ending his time on stage with his debut release ‘Flame’ first introduced back in May when he won the coveted American Idol season 17 title. With darkness setting in and cellphone flashlights lifted high, it looked like fireflies flittering in the stadium. Hardy clearly is the voice for the next generation of country music.

With 20 chart topping singles to his credit, Keith’s show was more a twin pack greatest hits parade, as he took concert goers back to the early years, carrying faithful fans into the 21st century. After welcoming the Charleston crowd and thanking them for their support over the years, he went right into his opening number which is the title of his tour. ‘That’s Country Bro’, reminded fans he’s just a country boy at heart.

An array of recognizable anthems followed including ‘Made In America’, ‘I Want To Talk About Me’, and the crowd favorite ‘Beer For My Horses'(complete with Willie Nelson video), with thousands singing the familiar chorus and raising their drinks in adoration. With ‘A Few More Cowboys’ Keith echoed the fact that we need to return to old school values and let our amen be amen.

Keith took some time to pay tribute to some of the hardest working people in America, as he lifted his plastic cup in salute to firefighters, police, and those he said are making the ultimate sacrifice, our military and their families. He jokingly added ‘hell looks like we’re going to turn this million dollar tennis court into a redneck hootenanny bar tonight’. That brought a thunderous hell yeah from the cowboys and cowgirls in attendance.

The Oklahoma native was never far from a chart topper, sending up ‘Wish I Didn’t Know Now’ and ‘You Shouldn’t Kiss Me Like That’ in quick measure. He brought the crowd up to date with ‘Don’t Let The Old Man In’, a haunting ballad inspired by veteran movie star Clint Eastwood, and a song Keith was proud to include in Eastwood’s 2018 film ‘The Mule’. Proving he’s got a little funk in his western boots, Keith got his groove on during ‘Who’s Your Daddy’, his 6th overall chart topping single from his 2002 release ‘Unleashed’. 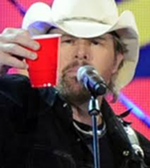 Just past the midway point he settled in for an onslaught of crowd favorites that got the stadium rockin’, leading off with perhaps the ultimate party tune ‘Red Solo Cup’. Keith provided a little back story, saying he recorded the track on a lark and didn’t give it much thought until he returned from overseas, and the record label told him he had a bonafide hit on his hands. The sing-a-long song has become another tailgate and redneck party staple.

He kept the good times flowing with ‘As Good As I Once Was’ and ‘I Love This Bar’ before revisiting his early days with ‘Should Have Been a Cowboy’. His first ever number one romanticizes his love for westerns, according to the reaction, it’s a pipe dream shared by many of his followers. ‘Whiskey Girl’ seemed to excite the ladies.

Without missing a beat he went right into the tongue and cheek ditty ‘How Do You Like Me Now’, a clever tune Keith’s admits has become somewhat of a catch phrase for him and his devoted followers. Making his final lap before his two song encore, Keith offered up another of his early hits, with ‘A Little Less Talk And A Lot More Action’ from his 1993 self titled debut album receiving equal appreciation from concert goers. It also proves he and his band know how to rock n’ roll.

Thanking faithful fans over the years made for heartfelt goodbye, only to have his exodus overshadowed by thunderous applause when he returned for an encore. A long supporter of our men and women in uniform, Keith closed out his show with double shot of American patriotism. Although Charleston doesn’t have an army base, the US Air Force & US Navy proudly call Charleston home, with his ‘American Soldier’ playing well to those in the crowd who support our troops.

He closed out his concert with ‘Courtesy of the Red, White, & Blue’, another praise he penned over his frustration with our war against Afghanistan, and a song that has helped lift the morale among our soldiers. The post 911 tributes both topped the country music charts, and have become signature songs for Keith, often ending his concerts patriotic appreciation.

Toby Keith has become a country music legend. His distinct voice, as well as his recognizable songs have struck a chord with country music lovers of all ages. Long time fans joined new recruits in witnessing one of Nashville’s great, and a proud American. For those further down the road, I highly recommend catching Toby Keith, and the up and coming face of tomorrow Laine Hardy, while they are out on tour.

George Thorogood Is Still Bad Ass, & That Is Good