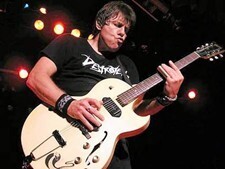 69 years young, hard rocking blues and boogie guitar guru George Thorogood has been on the road for nearly 45 years. The Delaware native first popped unto the scene back in 1974, with his band the Destroyers, selling over 15 million records during his more than four decade run.

Their self titled debut (1977) went gold and quickly introduced fans to Thorogood’s love of old school blues, giving us the popular remake of John Lee Hooker’s ‘One Bourbon, One Scotch, & One Beer’ as well as ‘Kind Hearted Woman’ by Robert Johnson. All totaled, Thorogood and the Destroyers have released 16 studio albums, earned six gold records, including two earning platinum certification.

However it wasn’t until 2017 that Thorogood released his first solo album, appropriately titled ‘Party of One’. “I guess it was long overdue. The record label (Rounder) had been on me for some time to put out a solo album.” Among the 15 tracks are salutes to Willy Dixon, Koko Taylor, and John Lee Hooker, as well as covers of obscure songs from the Stones, George Jones, & Bob Dylan. ‘Bad News’ has him covering the legendary Johnny Cash. 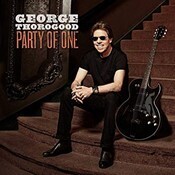 “The album was somewhat of a departure for me. Just going it alone was huge. I’m so used to having the band around me, and playing off other musicians. And covering some of the songs I included was daunting. But I connected with the songs.” Since it’s release ‘Party of One’ has received nothing but rave reviews from critics, with some adding it’s near perfection and a welcome return to his former label. “I was just trying to respect the artists and the songs. Nothing more, nothing less.”

Thorogood admits the solo project was a bit arduous. “It took me well over a year to complete. I was a little rusty. I had to get my chops down. It’s different when you’re going it alone. I had to find time between gigs to get into the studio. I’m glad it’s been well received. That makes the long process worth it.”

While hard core fans were following Thorogood and the band during the late 1970’s it was the MTV generation, and one of rock n’ rolls most durable bands that brought the guys to the forefront of rock and pop music. George Thorogood & the Destroyers opened for the Rolling Stones during their 1981 US Tour.

“We got lots of exposure during that tour. I was playing in front of some of the largest crowds I’d ever witnessed, easily 70 to 80 thousand people on some nights. It was crazy but I remember it being a lot of fun. When you’re sharing a bill with Mick & Keith, that’s something.”

Proving much like the Stones, that they were destined to be one of rock music’s most eternal bands, George Thorogood & the Destroyers embarked on a nationwide concert tour in late 1981, that has to be one of the single most steadfast feats in music history. In what has become known as the 50/50 tour, George and the band set out to play all 50 states in 50 days.

It kicked off in Hawaii, with the band flying to Alaska before moving eastward across the United States. With dual shows in Maryland and DC on the same day, the band actually completed 51 shows in 50 days. To date no other band has risen to the task. “Not sure we set out to break a record or make a mark. I’m not sure we gave it much thought at all, except for the fact it would be cool. It didn’t come off without some bumps in the road. There were some venue changes along the way. But we pulled it off.” The band travelled mostly in a converted 1979 checker cab.

Just 31 at the time of his 50/50 Tour, Thorogood admits that one of his legendary icons, no doubt raised the touring bar early in his own career. “Many people don’t know, but BB King played 342 dates during one year (1956). That’s unheard of. Now that takes a lot of stamina.”

Thorogood’s appreciation for blues music goes back to his early childhood. “I was first introduced to the blues listening to the early songs of the Rolling Stones. Their first couple of records, long before they did songs like ‘Satisfaction’. Many of the early British Invasion bands were influenced by blues masters. Guys like Jimmy Reed and Howlin’ Wolf.”

The early and mid 1960’s blues movement struck a chord with a then teenage Thorogood. “That got me headed in the right direction. The riffs Brian Jones and Keith were creating with their guitars had an impact on me. Not longer after I remember seeing Howlin’ Wolf on Shindig (1965). That only solidified my hunger for blues.”

While still cutting his teeth, and the band hanging their hats in Boston, Thorogood worked as a roadie for legendary blues man Hound Dog Taylor, a cat that found fame in his later years. “If you want to play the blues you have to surround yourself with those who lived it.”

A gifted and committed axe slinger, it’s hard to find Thorogood among any lists of the Top 100 rock n’ roll guitarists of all time, or among the Top 50 blues guitarists. At this point in his career he jokingly admits it doesn’t matter. “Maybe I’m number 51. Who the hell cares. I’m loving life and still out the playing for fans who fill the seats.” 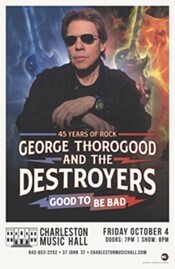 With an arsenal of mainstream rock radio hits including ‘Who Do You Love’, ‘Bad To the Bone’, ‘I Drink Alone’, ‘Born To Be Bad’, ‘Move It On Over’, ‘Cocaine Blues’, and ‘One Scotch, One Bourbon, & One Beer’, Thorogood has cemented his place in rock n’ roll history, putting his own spin on time honored blues classics alongside his own numbers.

Armed with that resume many industry types are scratching their heads, wondering why George Thorogood & the Destroyers haven’t been inducted into the hallowed the Rock n’ Roll Hall of Fame. His friend Steve Miller a 2016 inductee says the Delaware natives should be in, a opinion echoed by several other HOF members.

While his time may come, Thorogood will find solace in the fans. “As long as there is demand, and people want to pay me to perform I’ll continue to be out on the road. It is what I do best.” George Thorogood and the Destroyers bring their Good To Be Bad : 45 Years of Rock Tour to the Charleston Music Hall on Friday Oct 4th.

Follow us
Related Topics:charleston music hallgeorgegeorge thorogoodGeorge Thorogood & The Destroyers
Up Next

George Thorogood Is Still Bad Ass, & That Is Good