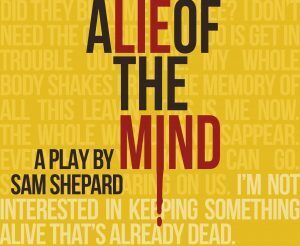 The College of Charleston Department of Theatre and Dance will stage “A Lie of the Mind” by renowned American playwright Sam Shepard. This was a landmark play that the author said he worked and reworked off and on over the course of nearly 25 years.

Told over three acts and set in the modern American West, the play explores two families, linked by a marriage, and it is a disturbing collision of distorted perceptions and ignorance.  “Sam Shepard is surely the only dramatist alive who could tell a story as sad and frightening as this one and make such a funny play of it without ever skimping on its emotional depth.” —The New Yorker.

Sam Shepard, who passed away in 2017, ranks as one of America’s most important dramatists. He wrote nearly 50 plays and his work continues to be produced across the nation and around the world. Outside of his stage work, he achieved fame as an actor, writer, and director in the film industry. Shepard gained the critical regard, media attention, and iconic status enjoyed by only a rare few in American theatre. Throughout his career he amassed numerous grants, prizes, fellowships, and awards, including the Cannes Palme d’Or and the Pulitzer Prize. In 1986, Shepard was inducted into the American Academy of Arts and Letters. In 1992, he received the Gold Medal for Drama from the Academy, and in 1994, he was inducted into the Theater Hall of Fame.

This production may contain material recommended for mature audiences.