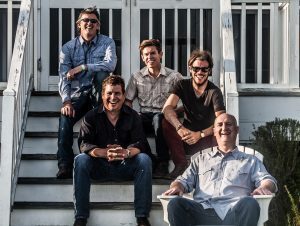 Blue Dogs will headline LOWVELO’s Opening Ceremony on November 1st at 5 pm. LOWVELO is an outdoor bike ride that raises money for cancer research at the Hollings Cancer Center at the Medical University of South Carolina.

The local Americana band will entertain crowds gathered at North Charleston’s Riverfront Park the evening before the November 2nd ride that includes three routes covering scenic spots throughout the Lowcountry. The Opening Ceremony will also feature special emcee David Lee Nelson, and a Lowcountry feast, complete with beer and wine. The Opening Ceremony is free for registered LOWVELO riders and kids under age 12. Tickets are $40 for nonriders, and can be purchased here.

At their core, the Blue Dogs love to reunite and play their songs for a good cause every year. To date, the group has raised a whopping half-million dollars for MUSC cancer research in their annual Homecoming shows, which consistently sell out the Charleston Music Hall. Not only that, but upright bassist and co-founding member Hank Futch will also ride the Boeing 50-mile route the morning after their performance.

In 2014, the band ended a decade-long break for their sold-out 25th anniversary celebration at the Charleston Music Hall, following it every December with another Homecoming show to raise money for the MUSC Children’s Hospital. Now, they’re back for a special LOWVELO performance to give MUSC Hollings Cancer Center a hand too.

Unregistered riders can help the cause and sign up for the ride here. Tickets for the Opening Ceremony can be purchased here.