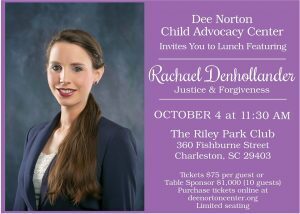 Dee Norton Child Advocacy Center, the region’s leading resource to prevent abuse, protect children and heal families, will host its annual luncheon featuring Rachael Denhollander on Friday, October 4th at 11:30 am at The Riley Park Club, located at 360 Fishburne Street in Charleston. Denhollander is a survivor and advocate for victims of abuse and the first woman who publicly spoke out and pressed charges against USA Gymnastics team doctor Larry Nassar.

Denhollander was 15 years old when Nassar sexually abused her. In 2016, sixteen years after the abuse began, she shared her story publicly, which was the impetus for hundreds of additional women who came forward with allegations. Her decision to speak publicly resulted in a loss of friends, community and privacy, but it also sparked justice for the victims.

Now an active advocate, author and educator, Denhollander travels the country and speaks out on issues of abuse and the cultural dynamics that allow abusers to remain in power. Those attending the luncheon will have the opportunity to hear Denhollander’s perspective on justice and forgiveness, as well as her personal experience with healing after abuse.

“Dee Norton is honored to bring Rachael and her story of resilience to our community,” said Anna Shaw, Director of Operations for Dee Norton.

Denhollander will also share how she stands with fellow survivors to help victims of abuse, and inspire attendees to call for accountability and advocate for those who need a voice.

Tickets to the luncheon are $75 per guest. Seating is limited and tickets can be purchased online at www.deenortoncenter.org.