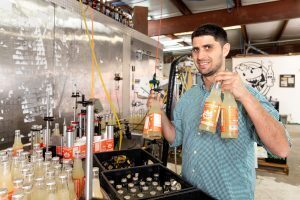 Matt Fendley is a numbers guy. A logistics guy. A strategy guy. But even he knows that – when you feel good about something – you’ve just got to go for it.

And he felt good about this.

He and his two longtime friends Mick Matricciano and Brandon Wogamon had created a concoction – and a concept – that they could be proud of.

“We started Cannonborough Beverage Company in 2012 with the idea of changing the way people think about soda,” says Fendley, now the CEO of the Charleston-based craft soda company. “We make all-natural sodas from fresh fruits, herbs and spices. We try to go for more unique flavors, try to pair a fruit and an aromatic component to make a new flavor experience for you every time.”

The first time the Summerville natives had that experience themselves was while messing around in the kitchen of their Cannonborough apartment.

“We actually liked, really liked what we made there,” says Fendley, who earned his bachelor’s degree in business administration from the College in 2010. “We had no money, no experience – but we believed in it, so we decided to jump into it head first.”

That strategy could have been a little uncomfortable for a logistics guy with no budget, but, as Fendley says, “the whole thing has been a learning process.”

Part of that process was returning to the College of Charleston for a second degree – this time in accounting.

“I mean, every time you have an accounting major, you do that in hopes of starting a soda company, right?” he laughs. But seriously: “I think having a degree in accounting and learning all that stuff definitely helps you out. The biggest thing I learned at the College was cashflow – and that you can be profitable but still go out of business. All of these things I think gave me a sort of a head start in what I’m doing today.”

And what he’s doing today is right up his alley.

“I just kind of see myself as overseeing the overall strategy of the company and just making sure everyone is in the best position to do what they need to do – make sure everyone’s happy,” he says. “I like getting involved in projecting stuff out and the logistics aspects of making it all fit together. It’s never boring, not even a little bit – and there’s always a new challenge every day that we’re trying to figure out.”

They’ve certainly figured a lot out since they launched the company – something that Fendley attributes to their friends in the craft beer industry.

“They got started before the industry exploded here, so they’d already put in a lot of work ahead of us and gained some good knowledge in terms of technique and production along the way. They learned a lot the hard way, and we kind of are piggybacking on their success,” he says, adding that local food and beverage startups like The New Primal and Bittermilk also had a lot to teach Cannonborough Beverage Company. “They really helped us add voice to our brand.”

And, between word of mouth and the local press, that voice kept getting louder and louder.

“Then we got the Garden & Gun “Made in the South” Award for the drinks category in 2015, and that kind of legitimized us out of the state,” says Fendley. “It all started with us selling soda at the farmer’s market, and then we just scrapped and clawed our way to selling in restaurants, and now we are selling in all the Whole Foods in the South and all the Fresh Markets in the country.”

With big contracts comes big responsibility, of course – and keeping up with that demand can be challenging for small businesses like Cannonborough.

That’s why they decided to apply for the Chobani Incubator Class of 2019. Chobani, one of the largest yogurt manufacturers in the country, created this competitive business-building program to “help small companies with big hearts and ideas challenge the food industry, improve broken systems and make a difference.”

“The way Chobani does business should be the goal for any company,” says Fendley. “They have great values, and they stick to them. They really do everything right. They’re there for the right reasons. They are just really smart.”

And they were really smart to select Cannonborough out of 550 applicants to be one of the seven businesses in their 2019 cohort. Each of the selected companies receives an equity-free grant of $25,000 and a stipend to travel to New York once a month over a four-month period for workshops on sales, marketing, operations and finance.

“We got to meet the best of the best,” says Fendley, adding that Cannonborough will be using the grant money for expanding their marketing and production.

Having gone from making five gallons of soda at a time to several hundred – all by hand – the company is grateful for the assistance.

“The biggest thing for us is staying true to the values of the brand. We’re not changing the world, but – by keeping it all natural, with whole ingredients from local farmers to create these unique flavor profiles – we’re changing the soda experience for people and giving them something they can feel good about,” says Fendley, adding that – while getting big accounts is great – it’s the small stuff like unsolicited compliments that make it even greater. “When someone says that they enjoy the product and that it makes their life better in some small way – or, like, ‘Hey, your soda was at my wedding, and it kind of just set the whole thing off’: That’s kind of like the best thing about it.”

And that’s something he feels really, really good about.