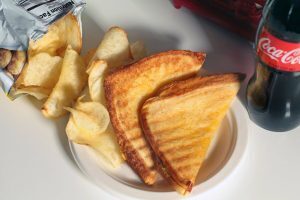 Pitt Street Pharmacy invites the community to Mt. Pleasant to watch Randy Santel, a professional food eater, take on “The Grilled Cheese Food Challenge” on Thursday, October 3rd at 6:30 pm. The event will serve as the kick off for Randy’s 2019 4th Quarter food challenge, where he attempts to win 1,000 food challenges in all 50 states and more.

Pitt Street Pharmacy’s current record holder is David Hester, who ate 27 grilled cheese sandwiches on May 30, 2013. Santel’s goal will be to top that number on October 3rd.

Santel is founder and owner of FoodChallenges.com. He has won over 779 food challenges in all 50 states plus 33 countries around the world, and those numbers are growing. At this time he has 860,000 YouTube Channel followers and 840,000 Facebook followers.

He is also an advocate on the importance of nutrition, fitness, and personal wellness and graduated this year from Missouri State University with his second degree, a Bachelor’s in Nutrition & Dietetics. In addition, he was the winner of the 2010 Men’s Health/Spartacus Body Transformation Challenge.

Pitt Street Pharmacy has been in business for 82 years. Since 1937, the pharmacy has made compounded medications for patients. The Soda Fountain is one of the few full-service Soda Fountains left in the nation. It has been featured in movies, television programs, books, cookbooks and numerous publications.