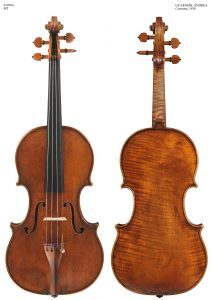 A world-famous violin will now call Charleston home. Concertmaster Yuriy Bekker of the Charleston Symphony has received a 1638 Guarneri violin for his use this season, generously loaned to him by an anonymous patron.

The ex-Degen violin, named for a famous previous performer, was made by Italian luthier Andrea Guarneri in 1638, and is one of the earliest examples of Guarneri craftsmanship. Along with instruments made by fellow Cremona native Antoni Stradivari, violins bearing the Guarneri name are the most coveted in the world, considered to produce a deep and rich sound unparalleled by any other.

“I’m still in shock that I get to play this instrument,” Bekker said of the violin. “It’s a real powerhouse. Its sound fills the hall in a way I never knew one instrument could.”

Bekker will debut the ex-Degen Guarneri at the Charleston Symphony’s season premiere, Mozart in the Lowcountry, on September 27th. The violin will take center stage in the first half, when Bekker performs composer and Charleston native Edward Hart’s violin concerto, Under an Indigo Sky. The concert will be live recorded and released next year as part of the Charleston Symphony’s first CD in over 20 years. Music director Ken Lam will conduct.

“It is such a privilege to have one’s music performed by a world-class violinist and on a world-class violin.” said Edward Hart. “Yuriy is so excited to play this instrument that he reminds me of my son when receiving his first bicycle….but Yuriy’s bike is 381 years old!”

Bekker added, “I am eternally grateful to the patron who has donated this violin. I cannot wait to share its beauty with the people of Charleston.”

“Don’t Let The Pigeon Drive the Bus!” Stopping at the Gaillard in 2020