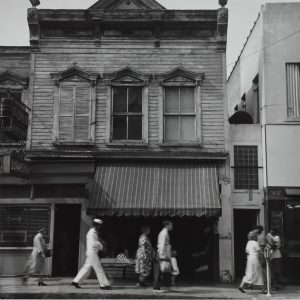 The Gibbes Museum of Art last week opened their two newest special exhibitions, Rauschenberg in Charleston and Influence and Inspiration: The Art of Jill Hooper, Ben Long, and Frank Mason. Both special exhibitions will be on display in the museum’s third floor galleries from September 13, 2019 – January 5, 2020.

“We are excited to be showcasing these works that will give visitors a sense of Charleston’s rich cultural heritage and history through a vibrant artistic lens,” says Angela Mack, executive director of the Gibbes Museum of Art. “People familiar with Charleston will be delighted to see Robert Rauschenberg’s photographs taken of Charleston between 1952 and 1981. Also, the works of local artist Jill Hooper, and her colleagues Ben Long and Frank Mason showcase an amazing collaboration in Influence and Inspiration.”

When Robert Rauschenberg (American, 1925–2008) selected Charleston, South Carolina as one of six American cities to highlight in his monumental 1980-81 photography project, In + Out City Limits, the pioneering artist was returning to his artistic roots. Long before he became known as one of the twentieth century’s most influential artists, Rauschenberg found much of his inspiration through the lens of his Rollieflex camera. His first experiences with photography were in the South as a student at Black Mountain College outside Asheville, North Carolina between 1949 and 1952, and Charleston was one of his earliest subjects. Rauschenberg in Charleston revisits a selection of Rauschenberg’s Charleston photographs taken between 1952 and 1981 and examines their appearance in several later works. For images of Rauschenberg in Charleston, visit: https://bit.ly/2FPgfw8.

Spanning multiple generations, Influence and Inspiration celebrates three artists devoted to classical training and united by friendships. Frank Mason (American, 1921–2009) was an influential teacher at the Art Students League in New York City for over fifty years and a passionate supporter of the arts. In the 1960s, Mason taught Ben Long (b. 1945), a promising young artist from North Carolina. Long has since distinguished himself on the international stage as a realist and a prolific fresco painter. Charleston-based artist Jill Hooper (American, b. 1970) studied under Ben Long, who remains an important mentor to this day. Like Long and Mason, Hooper is a realist painter who has earned international acclaim for her powerful portraits, landscapes and still-life paintings. Together these artists demonstrate a commitment to the techniques of the Old Masters while offering their unique artistic perspectives on contemporary life. Influence and Inspiration includes paintings and drawings by each artist. The works demonstrate the rigorous training and preparation behind each finished painting and offer a glimpse into the artist’s working process. Subjects range from portraits and genre scenes to large-scale religious paintings. For images of Influence and Inspiration: The Art of Jill Hooper, Ben Long, and Frank Mason, visit: https://bit.ly/2UbZmEq.