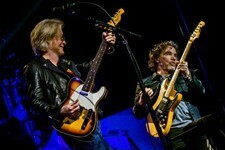 Like fine wine, power pop and rock duo Daryl Hall and John Oates get better with age. Before nearly 7000 appreciative fans Thursday (Sept 19th) at the North Charleston Coliseum, the Philadelphia boys performed 15 songs over an hour and a half, taking concert goers on a hit parade back to the 1970’s and 80’s. Among their offerings, included six chart toppers.

Several attending the show came out for different reasons. While the higher percentage of the crowd was made up of baby boomers, looking to revisit a soundtrack of their lives, for the rest under 40 it was perhaps an opportunity to witness the big selling duo of all time. No matter the reason, all in attendance were subject to a high energy show, full of pop, rock, and blue-eyed soul music, combined with fluid musicianship.

Fellow Philadelphians G. Love & Special Sauce opened the show, with their own brand of alternative rhythm and blues, easily getting the crowd pumped for the main attraction. Their rendition of Paul Simon’s ’50 Ways To Leave Your Lover’ was just one of the many highlights during their 40 minute set.

With the roadies reworking the stage those still in their seats were entertained on the big screens with performances of ‘Live From Daryl’s House’, providing a nice segue way into Hall and Oates first number, the upbeat ‘Maneater’ from 1983. They followed that in succession with ‘Out of Touch’, ‘Adult Education’, and Method of Modern Love’ with Daryl offering up introductions to each number. He added it’s often tough be on the road because you crave to get home. Many locals are fully aware Hall owns a home in downtown Charleston.

After ‘Say It Isn’t So’ and ‘One on One’, the guys sent out their cover of the Righteous Brothers ‘You’ve Lost That Lovin’ Feelin’, a song Hall admitted was one of the greatest blue-eyed soul songs ever written. It was the duo’s introduction into the 80’s decade, with their version reaching #12 on the Billboard Top 40 Charts in 1980.

While Daryl did most of the talking, both thanked the crowd for their support over the past 45 years before he transitioned to the grand piano, with the guys going way back with extended versions of ‘She’s Gone’ and ‘Sara Smile’, iconic tunes Daryl was sure the crowd would recognize.

Daryl further apologized for last minute venue changes. The show was originally set for MUSC Health Stadium on Daniel Island but was re-routed to the coliseum to forgo any last minute weather concerns. The coliseum was an ideal host allowing for two big screens either side of the stage providing close up images of the band and the crowd. 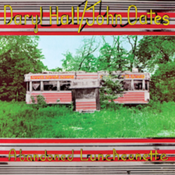 The single backdrop behind the band was illuminated throughout offering up an exquisite light show, enhancing many of the duo’s numbers. It was particularly helpful for a trip down memory lane when they showed a cover of 1973’s ‘Abandoned Luncheonette’, the same iconic album that gave the world ‘She’s Gone’.

Proving they have an artistic and heavier rock sound, Daryl said they were going to cut loose with ‘Is It A Star’, off 1974’s ‘War Babies’ album, easily their heaviest album. The song allowed the band to showcase their many musical talents.

Nearly two thirds the way thru their show, Daryl returned mid stage with a smaller keyboard in place, setting up a six minute dance party as he and the guys belted out ‘I Can’t Go For That (No Can Do)’. Hall and Oates fourth chart topping single (1982) left most dancing in the aisles, before the bandmates said a quick goodbye and exited the stage.

The exodus was short lived with the band returning within a couple of minutes, and Daryl sending out the familiar intro to perhaps their signature song. As thousands in the crowd provided back up support, Hall and Oates waxed nostalgic with 1977’s ‘Rich Girl’, the bands first of six number one hits.

A triple threat medley followed as the Rock & Roll Hall of Fame Inductees finished in a whirlwind with ‘Kiss On My List’, ‘Private Eyes’, and ‘You Make My Dreams’ extending the 1980’s dance party at the North Charleston Coliseum. The Philadelphia duo have easily cemented their place in music history, and show no signs of slowing down.

Devoted fans I spoke with after the concert made the trip from Columbia, Savannah, and North Carolina to take in the show. Clearly Daryl Hall and John Oates do make dreams come true for those who have followed them for more than four decades.

Seeing the band live is similar to having a really cool party at your house where you pull out records and crank up the volume on the stereo. There is no indication the duo is about to call it quits, so a low country return could be in the future, maybe during their 50th anniversary tour.