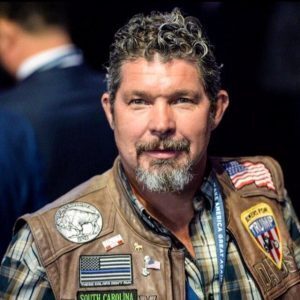 Republican Chris Cox, the founder and former leader of “Bikers for Trump,” will officially announce his run for South Carolina’s 1st Congressional District seat on Saturday, September 21st, 2019. “Chris Cox for Congress” will host a rally and meet and greet on the deck at Red’s Ice House on Shem Creek beginning at 3 pm.

The country was introduced to the Mt. Pleasant resident during the 2013 government shutdown when he was spotted mowing the lawns outside the Lincoln Memorial and maintaining the monument for the duration of the 16-day shutdown.
Inspired by then-candidate Trump’s presidential campaign, Cox formed “Bikers for Trump” in 2016. In the years since, the organization has grown to over 300,000 members. Cox has since stepped down from the national organization in order to focus on his candidacy.
SC’s 1st Congressional seat is currently occupied by Democrat Joe Cunningham. SC State Representative Nancy Mace, Beaufort County Council member Mike Covert, and Mt. Pleasant Town Council member Kathy Landing (all Republicans) have also announced their intentions to run against Rep. Cunningham.
For more information about Chris or his campaign visit https://www.chriscox2020.com.

Food Truck Friday Returns to The Ponds on September 27th