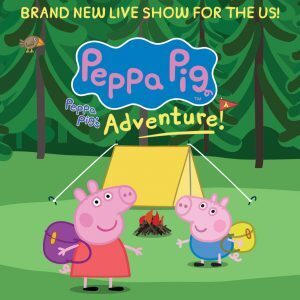 Peppa Pig, the most charming little piggy on the block, has hit the road on a brand-new live stage show tour across the US and will stop by the Charleston Gaillard Center on September 24th. Fans spanning from Nicky Hilton, Jimmy Fallon, Jimmy Kimmel and Stephen Colbert to rappers Lil Nas X and Iggy Azalea, and even Princess Charlotte, have been contributing to the brand love for Peppa Pig following the preschool property’s first-ever music album release, My First Album. On the heels of its success, the all-new live stage show, Peppa Pig’s Adventure! (www.peppapigliveus.com) is sure to keep fans talking – and singing and dancing in their seats!

In “Peppa Pig’s Adventure!,” Peppa Pig gets ready to go on an exciting camping trip to the woods with George and her school friends, including Pedro Pony, Suzy Sheep and Gerald Giraffe. With lunchboxes packed and Daddy Pig driving the bus, Peppa and friends are excited about their outdoor adventure, full of games, laughter and live music. The happy campers soon settle down to sleep and listen to the gentle pitter-patter of rain. Safe and warm inside their tents, the excited group can look forward to morning time, when there will be lots of muddy puddles to jump and play in.

Peppa Pig Live! is based on Entertainment One’s (eOne) top-rated animated series that airs daily on Nick Jr. The various tours have sold over a half a million tickets while logging more than 340 performances in North American cities since 2015.

For tickets, VIP packages – which include meet and greets with the characters – and tour merchandise, visit www.peppapigliveus.com.