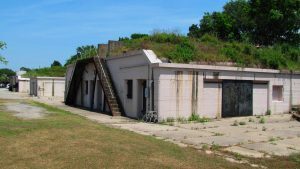 PURE Theatre recently announced their participation in a highly-interactive theatre experience, Osceola’s Muse, in benefit of the Battery Gadsden Cultural Center. The pivotal historic episode of the Seminoles’ time on Sullivan’s Island will be dramatized in and around the Fort Moultrie battery where the tribe was held captive. This immersive theater experience will include live actors, music, original costumes, and scenery along with audience interaction inside and around Battery Gadsden.

The event will run for four performances only on October 11th, 12th, 18th and 19th, 2019 at 7:30 pm. In addition to the performances, a pop-up gallery of Jonathan Green’s costume images will take place on October 11th from 5 pm to 6:30 pm at Sandpiper Gallery, located at 2201 Middle Street on Sullivan’s Island.

“On Sullivan’s Island where Osceola is buried, his spirit still looms,” Osceola’s Muse Producer Carol Antman said. “The overgrown remnants of Fort Moultrie batteries give an inkling of the conditions he and his tribe endured while prisoners there. Street names like Osceola and Thompson Avenues remind us of the island’s conflicted role in the Seminole Wars. Fables of his bravery and leadership blow on the sea breezes as historians continue to debate the issues of deceit and heroism that framed this important part of South Carolina history. Inspiration is springing from elements of Osceola’s life that are highly theatrical: his flamboyance and leadership, his two wives (including Morning Dew, the daughter of an escaped slave), the curiosity of his numerous visitors and the ceremonies, music and rituals of his tribe. Using artistic license, Osceola’s Muse will juxtapose authentic history with spectacle to provide an entertaining experience that is historically based as well as enlightening.”

Tickets are $35 for general admission and $55 for VIP. They can be purchased online at puretheatre.org or through the PURE Theatre Box Office at 843-723-4444, Tuesday-Friday from 12pm-6pm.

Battery Gadsden is located at 1917 I’On Ave. on Sullivan’s Island.

“The Play’s The Thing!” – Storytree Sheds Some Light on Shakespeare’s Female Roles