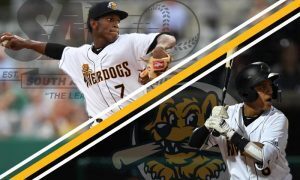 Following a red-hot stretch to finish the year, the Charleston RiverDogs closed out the season playing their best baseball, albeit without a playoff berth to show for it. The South Atlantic League on Tuesday recognized two Charleston RiverDogs as the top performers in the Single-A circuit during the final week of the season as right-hander Roansy Contreras and infielder Eduardo Torrealba were each tabbed as the league’s Pitcher and Player of the Week, respectively.
Between two starts on Monday at Asheville and Sunday versus Greenville, Contreras allowed just one run over 12.0 innings while striking out 14 to close his season on a high note. The 19-year-old was utterly dominant down the stretch of the season for Charleston, recording a 1.80 ERA across his final 11 outings dating back to June 29. He won his last five starts and six of his last seven to finish the year with a 3.33 ERA while striking out 113 over a team-high 132 1/3 innings. The Dominican Republic native’s decision on Sunday against Greenville made him the first 12-game winner for the RiverDogs since 2007.
The league’s nod to Contreras marked the third straight week in which the RiverDogs brought home the SAL Pitcher of the Week award after Luis Medina and Josh Maciejewski were tabbed as the top pitching performances in the previous two. Luis Gil was also selected as the circuit’s top performer on the mound for the June 10-16 period.
Proving one of the best defensive middle infielders in the circuit all season, Torrealba provided the bat to match during the final week to become just the second RiverDog to be named the league’s Player of the Week this year. The 20-year-old Venezuelan went 13-for-29 (.448) over the league’s final week while leading the SAL circuit in hitting, slugging (.759), and OPS (1.226) during his best seven-game stretch of the season. After collecting just one extra-base hit during his first 30 games played following the All-Star break, a span in which the former Red Sox farmhand batted just .160, he broke out in the season’s final week to drill four doubles and his first home run in the last two seasons with a longball on August 26 in Asheville.
The RiverDogs closed the season winning 20 of their last 30 to fall 4.5 games short of Augusta in the second-half playoff race.
With the 2019 season in the books, the RiverDogs look ahead toward 2020 Opening Day on Thursday, April 9 at Riley Park. Season ticket plans, including options to the Riley Park Club, are available by contacting the RiverDogs front office at 843-577-3647 (DOGS). A full schedule for the 2020 season is available at riverdogs.com.
Charleston Player & Pitcher of the Week Accolades, 2019
May 20-26: OF Josh Stowers
June 10-16: RHP Luis Gil
Aug 12-16: RHP Luis Medina
Aug 19-25: LHP Josh Maciejewski
June 26-Sept 2: INF Eduardo Torrealba, RHP Roansy Contreras