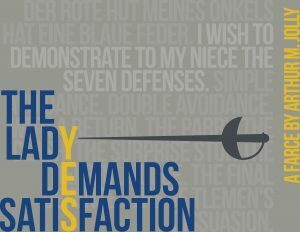 With a focus on “family,” the College of Charleston Department of Theatre and Dance 2019-2020 season will be fun, challenging, heart-breaking and weird. The first of seven productions this academic year will open in September. Directed by faculty member Todd McNerney, “The Lady Demands Satisfaction” is a farce set in the mid-1700s by award-winning playwright Arthur M. Jolly.

When a young maiden who has never touched a sword learns that she must defend her inheritance in a duel, she struggles with a milksop suitor, a servant girl posing as a Prussian fencing master, a Prussian fencing master who thinks he is there to marry her, a stodgy lawyer and her domineering aunt – the finest blade anywhere – to save her house and lands. Like all classic farces, everyone gets the ending they deserve in unexpected ways…but will they be satisfied?

“In a traditional farce-like style there are mistaken identities, individuals hiding their truths, and loads of laughs. Even with all of that more importantly, it also has a very heartfelt message of inclusion and diversity.”

The play was written for and was the winner of the 2017-2018 Joining Sword and Pen Competition. In addition it won the 2018 Todd McNerney National Playwriting Award. Jolly has penned over 60 produced plays, with performances presented across the United States and in Canada, Europe, Asia, Australia, Africa and South America. He has won the Joining Sword and Pen Competition a record three times and also produced several award-winning screenplays. Jolly will be in attendance opening night on September 26 and will participate in the talkback following the performance. In addition on opening night, there will be a Champagne toast honoring the playwright and the start of the season.

“The Lady Demands Satisfaction” will run Thursday, Oct. 3rd, 2019 through Monday, Oct. 7, 2019. Showtimes will be 7:30 p.m., except for the show on Sunday, October 6th at 2:00 p.m. only. Performances will take place at the Emmett Robinson Theatre in the Simons Center for the Arts, 54 Saint Philip St. Admission is $20 for general public; $15 for patrons under 18 and over 60; and $12 for College of Charleston students and employees. Season subscriptions and tickets can be purchased online at theatre.cofc.edu, by emailing cofcstages@cofc.edu, or calling (843) 953-6306.

Season subscriptions offer a $15 savings for seven productions and provide priority seating, flex-ticketing, exchange privileges, and special events and opportunities. The season includes: “The Lady Demands Satisfaction” “A Lie of the Mind” by Sam Shepard, “Legacy – a dance concert,” “Spark” by Caridad Svich, “Last Night and the Night Before” by Donnetta Lavinia Grays, “Journey – a dance concert,” and “The Addams Family” musical with book by Marshall Brickman and Rick Elice and music and lyrics by Andrew Lippa. Learn more at theatre.cofc.edu.

Follow us
Related Topics:college of charlestonCollege of Charleston Department of Theatre and Dance
Up Next