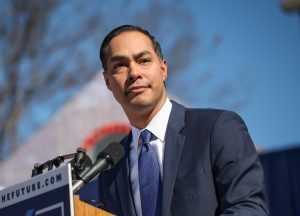 The Bully Pulpit Series at the College of Charleston will host Democratic presidential candidate Julián Castro, former U.S. Secretary of Housing and Urban Development, for a conversation. Castro will meet with faculty, staff, students and the community during the event on August 30, 2019.

The event will take place at the College of Charleston Rita Auditorium located at 58 Coming Street from 4:30 pm to 6:30 pm. This event is free to attend and open to the public with ADA seating available. You can RSVP here.

While pursuing his undergraduate degree at Stanford University he interned at The White House during the Bill Clinton presidency. After graduating from Harvard University with his J.D., he became an attorney at the law firm Akin, Gump, Strauss, Hauer & Feld. In 2001, Castro was elected councilman representing District 7 on the San Antonio City Council, and was the youngest councilman ever elected in the city’s history. In 2009, he was elected mayor of San Antonio and won re-election in 2011 and 2013. In 2014, Castro became the U.S. Secretary of Housing and Urban Development and served in that role until 2017