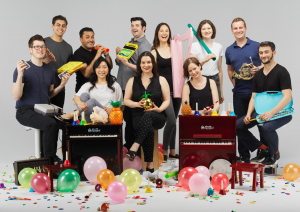 Fifth House Ensemble presents a concert of music for Piano Trio centered around three composers who have mastered the art of creating engrossing musical conversations. On September 16th at 7 pm, the ensemble presents music spanning three centuries of music composed by Amy Beach, recent Pulitzer winner Jennifer Higdon, and Johannes Brahms. Each of these works develops a lively conversation through contrasts of different musical emotions, topics, registers, and interpretations. The program culminates a full day of masterclasses and workshops with Ashley Hall students, as part of the ensemble’s ongoing residency.

Amy Beach’s Piano Trio Op. 150 is a collection of witty and sharply-turned conversations which alternatively build on or interrupt each other in glorious collisions like any lively conversation among friends. Beach was a true American original; the first highly successful American female composer of classical music, as well as the first female composer to publish a symphony in America. Beach’s Trio is exactly the kind of musical conversation in which this driven and quick-witted individual might have indulged.

One of the most-performed living composers, Jennifer Higdon’s music captures not only vivid conversational contrast but also magical moments of stasis and suspension, couched in the reverie of a good yarn that alternates moments of adventure with moments of repose and contemplation. Originally hailing from American South, Higdon’s music often bears the tinge and twang of bluegrass or the robust harmonic clashes of congregational singing; there’s something both genteel and rustic about her musical language in the first movement of Higdon’s Piano Trio, Pale Yellow.

Brahms’s Piano Trio No. 1 in B major was completed when the composer was just twenty years old, still under the shadow of Beethoven that would hinder him from completing his own first symphony for many years. In this masterwork of romantic era chamber music, we hear one of the greatest musical voices of the 19th century flexing his muscles, straining to one-up his predecessors and in doing so pushing the piano trio to a level of nuance and complexity that threatens to explode the rhetorical niceties of the earlier Classical period. It’s a work in which Brahms’ increasingly bold voice ignites a series of discursive tangents.

Do the contrasting voices and in these works coexist, or cancel each other out? Do they provide a glimpse of the diversity of a single character, or a community of many? The interpretations themselves can often become split into equal and opposite viewpoints. In a world where our lives are often unexpected and where we must adapt to emotional and physical changes as they arise, Fifth House presents the music of Beach, Higdon, and Brahms as an opportunity to explore these questions together.

Tickets will be available for purchase here. Click here for further info.

Praised by the New York Times for its “conviction, authority, and finesse,” the Chicago-based Fifth House Ensemble harnesses the collaborative spirit of chamber music to reach beyond the traditionally-perceived limits of classical music. The ensemble’s artistic, educational, and civic programs engage theater groups, video game designers, corporate innovators, and folk bands to share stories as diverse as the communities it serves.

An established partner and resource to the nation’s top music schools and conservatories, Fifth House launches the careers of emerging artists through entrepreneurship residencies and training programs, including those at Yale College, Eastman School of Music, New England Conservatory, Indiana University, Northwestern University, DePaul University, and the Colburn School. Fifth House’s recent creative partnerships with The Cleveland Orchestra, The Cleveland Institute of Music, and The San Francisco Opera have resulted in bold new directions in arts integration and civic practice. In 2012, Fifth House launched Fresh Inc, a two-week, intensive training program for emerging composers and performers where Fifth House works with participants on building careers in music in line with their own unique, vision and values.

Join the 80’s Bar Crawl on King Street This Sunday