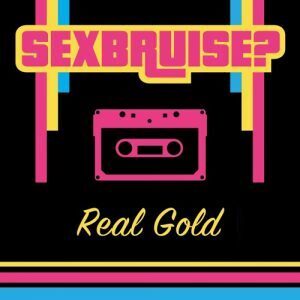 Local band sexbruise? is known for their grandiose social media posts and wild assertions during interviews, but they’ve also built a reputation as one of Charleston’s best live acts. In fact, they’ve won the Charleston City Paper’s Electronic/Experimental Act of the Year award multiple times.


The satirical pop band combines elements of improvisation, electronic music, poppy hooks, and audience participation to create an unforgettable live experience. If you love their live show, you’ll want to grab sexbruise?’s 5-song EP, Real Gold, when it is released on August 30th. I could share more details about the release, but honestly, it’s far better if I let the band’s press release speak for itself:

American pop/humor band sexbruise? will release Real Gold, the band’s first 5-song EP. This is a follow-up to a massively successful run of singles released on Spotify between 2017 and 2019, and their first collaboration with famed producer DJ Khaled.

In 5 songs, Sexbruise? traverses genres from synth-wave, to rap, to pop-country. At times comedic, at others absurd, Real Gold is a commentary on modern pop music, nostalgia, and fame.

The EP contains a series of previously unreleased crowd favorites: “Party In the 80’s,” “The Weather Channel,” “Bop It,” “Lazers,” and the title track Real Gold.

Real Gold will be available on all streaming platforms August 30 and will be featured prominently on Gas Station TV at all participating BP and Shell gas pumps.

A music video for the single “Party in the 80’s” will accompany the release, directed by Barret Burlage and Kyle Perritt.

Sexbruise? Will be announcing their Fall Tour to coincide with the release, and have already announced that they will be performing at Skinful Halloween Festival this October. A full list of Tour dates can be found at http://sexbruise.com.

Toby Keith to Perform at Volvo Car Stadium in October