Connect with us
Press Release
Wha 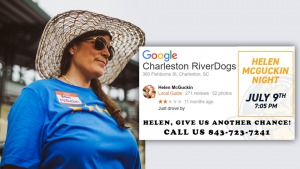 t started with a harmless two-star review has turned into a five-star idea that had RiverDogs fans on the hunt for one mysterious local reviewer. For their efforts to go the extra mile to capture a five-star rating, the RiverDogs have been recognized as Minor League Baseball’s July Promotion of the Month for “Helen McGuckin Night.”
In May 2018, the RiverDogs received a Google Review that simply stated, “just drove by, 2 out of 5 stars.” In the hopes of a second chance, the RiverDogs began a tireless search for the author, Helen McGuckin, a Level 7 local guide on Google, and invited her out to a July 9th contest at Riley Park. Despite lavish promises of an unforgettable night at The Joe, due to a scheduling conflict, Helen was unable to attend the game at the final hour.
Serving as a stand-in Helen, Charleston’s office manager Cynthia Linhart was treated to a VIP experience at the ballpark. “Helen” was granted her every wish, complete with a foot bath, shaded seating, and an umbrella attendant at her side throughout the night. Helen’s favorite songs were played during the game and the RiverDogs’ video board hat shuffle was rigged in her favor. Fans participated in “How many stars did Helen rank it?” trivia, guessing the popular reviewer’s ratings of other Charleston establishments based on her Google reviews.
The July Promotion of the Month accolade marks the RiverDogs’ first since 2017. They were honored with the May Promo of the Month for the World’s Largest Silly String Fight, when the club unloaded 4,025 canisters of silly string during the seventh-inning stretch. This year’s monthly accolades qualify the RiverDogs as a Golden Bobblehead finalist, awarded to the top promotion in MiLB each season. 2018’s Color Night was also named as a finalist for the award last year. The RiverDogs last garnered a Golden Bobblehead in 2012, recognizing their All-Star Home Run Derby hosted on the deck of the U.S.S. Yorktown.
Fans can “Make Fun” with the RiverDogs all season long down at The Joe. Single-game tickets, including options to the Riley Park Club, are now available at riverdogs.com/tickets or by contacting the RiverDogs front office at 843-577-3647 (DOGS). A full schedule and list of game times for the 2019 season is available at riverdogs.com.