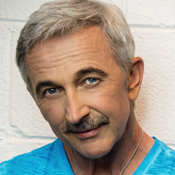 Like many of his contemporaries country singer Aaron Tippin was a force to be reckoned with in the 1990’s. His undeniable twangy baritone voice coupled with his blue collar, pro America songs set him apart, and quickly made him a favorite with country music radio and fans. Born in Pensacola, Florida Tippin’s southern roots took shape during his formative years in the Blue Ridge Mountains of Travellers Rest, South Carolina.

After spending four years as a songwriter in Nashville Tippin signed a record deal with RCA in 1990 and his journey began. His first song ‘You’ve Got To Stand For Something’ put him on the map, cracking the Top Ten on the charts, and becoming one of his many anthems. Before the decade ended Tippin would garner nine Top Tens hits, with ‘There Ain’t Nothing Wrong With the Radio’ (1992), ‘That’s As Close As I’ll Get To Loving You’ (1995), and ‘Kiss This’ (2000) all reaching number one. Along the way he’d rack up six gold records and one platinum. 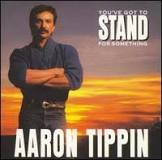 In 2020 Tippin will celebrate 30 years as an artist in country music. Although he might be far removed from his heyday, the country crooner who turned 61 this year doesn’t regret where he’s at. “I’m having more fun today than I’ve ever had. The good Lord has been kind to me. To still be performing and active in country music is a blessing to me. I don’t take any of my journey for granted.”

Tippin accepts that country music like all genres evolves. “I enjoyed my time in the bigger spotlight.” His earlier run is what continues to fuel his passion. “I don’t have new songs out or a major record deal. Country music radio will always move on to younger artists, and put some of us out to pasture. I’m okay with that. What keeps me motivated are the fans. They stay with you through thick and thin. They are the reason I’m still out there touring.”

This summer Tippin is out on the road with fellow 90’s icons Sammy Kershaw and Collin Raye. “Two of my best buds, and great artists in their own right. The three of us out on the road together, that’s a country music hit parade.”

Proving his claim that fans are still hungry for veteran artists, Tippin adds. “We just performed at the annual Hodag Festival in Wisconsin. They put the current artists on Friday and Saturday night, with the three of us opening the show on Thursday. We set an alltime record for the Thursday night show. We played to over 30,000 fans. I’m not bragging but that says something about what we have to offer, and the testament of country music fans.”

Travelling back to 1991, Tippin’s career got a jumpstart from another entertainment icon. “My first tour was with Bob Hope performing for the troops overseas. Such a great experience. One I’ll never forget.” Tippin has and always will be a supporter for the military. “Over the past thirty years I’ve been to Iraq, Saudi Arabia, Pakistan, you name it. Love performing for our troops, and love meeting them. We owe them so much.”

Tippin travels overeas with Stars For Stripes, a Nashville based non-profit organization founded in 2003, dedicated on bringing celebrities to entertain troops deployed around the globe. Much like the USO, Star For Stripes strives to improve overall morale for the men and women protecting America’s national interests. “Flat out one of the best run organizations I’ve ever been a part of. It’s run by a lady named Judy Seale, whose sole intent is to bring a little bit of joy to places that really need it.”

It’s the same motivation that drives him when performing here in the states. “When my songs started to get less airplay it bothered me at first, but then again I noticed the only person it was affecting was me, so I quickly got over it. As long as the fans keep coming out, that’s all that matters. They are the ones that let you know when your career is over. When they stop turning out, that’s when it’s time to return to the house.”

It’s not as though Tippin doesn’t have other interests. He’s been a licensed pilot and an aviation buff for almost his entire adult life. “Aside from my family, music and flying are among my greatest passions. When I’m not on tour or hanging with the family, you can usually find me at the airport tinkering with some of my planes. I have several old warbirds that keep me busy. There is just something very satisfying I find fixing up old planes.”

He does have room for another passion he shares with his wife and inner circle, and that is wine. “I guess about 20 some odd years ago I began to develop a taste for wine. It actually was my wife’s father who turned me on to wine. Soon my wife and I started to make wine out on the farm.”

A few years back he partnered with Tennessee-based Stonehaus Winery. His Blackberry Wine was introduced with great success in 2015 saluting his 25the year in the entertainment business, which just happened to coincide with Stonehuas’ silver anniversary as well. The two followed that up in 2017 with ‘Kiss This’, a cherry wine named after Tippin’s 2000 song. “It’s been a great partnership. I’m proud of the wines we are making.”

He says his wines are more dessert wines, easily paired with after dinner fare, like a nice cheesecake or more like sangria drinks while lounging at the pool. “All I know is that they’ve been well received, and I’m thankful for that.” He adds, “I’m not just a name on the bottle. I get involved. I truly love making wine.”

His latest album ‘Aaron Tippin 25’ was released in 2015. “The title speaks for itself. It was my 25th year in the business so I thought I’d pay tribute to that.” He stills finds to to write nowadays, but says he focuses less on it. “As you can see, I have a lot of interests and things that keep me busy, so songwriting is something I work in. I like to think I could write something cool for the artists in Nashville today.”

For now he’s content recording at his own pace. He owns his own record label, Nippit (Tippin spelled backwards) Records. And as long as fans fill the seats he says he’ll tour. “The fans make it all worthwhile.” Tippin along with Sammy Kershaw and Collin Raye will bring their concert tour to the Roots & Boots Festival at Yonder Field in Bowman, South Carolina on Saturday August 24th. The family friendly event will feature food trucks and tethered hot air balloon rides.

Together the trio have over 80 songs that have cracked the Top 40 country music charts. Tippin’s arsenal includes ‘I Wouldn’t Have It Any Other Way, ‘My Blue Angel’, ‘Working Man’s Ph.D’, ‘For You I Will’, and ‘Where the Stars and Stripes and the Eagle Fly’. Tippin is often described as a patriotic country balladeer who likes to offer up the occasional honky tonk medley. “I’m a hillbilly at heart. I love to sing, and I sing what I know and what I feel.”

Among Kershaw’s hit parade are ‘Cadillac Style’, ‘Anywhere But Here’, Third Rate Romance, ‘Love of My Life’, ‘Queen of My Double Wide Trailer’, ‘Vidalia’, ‘Meant to Be’, and the chart topper ‘She Don’t Know She’s Beautiful’. 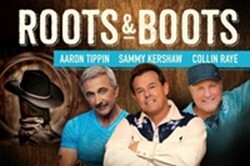 According to Tippin if they played all their hits the show would last forever. “We definitely lit up country radio back in the day. I think at this point in our careers we’ve all given up hope we’d have a legacy like Elvis, but I guarantee all three of us are happy to be out there and playing our songs for grateful fans. This tour does not disappoint.”

For more on the Roots & Boots festival at Yonder Field visit their website at https://yonderfield.com/roots-%26-boots-%26-balloons