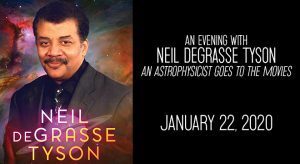 On January 22, 2020, the North Charleston Performing Arts Center will host “An Evening with Neil deGrasse Tyson: An Astrophysicist goes to the Movies“ at 7:30 pm. Tickets go on sale Friday, August 23rd, 2019 at 10 am.

From Star Wars to Frozen to The Martian, Dr. Tyson will provide an “entertaining and enlightening review of all the science that our favorite movies got wrong, combined with some of the stuff they got right.”

Dr. Tyson is an astrophysicist and author who is the Frederick P. Rose Director of the Hayden Planetarium at the Rose Center for Earth and Space in New York City. He’s won several awards including the NASA Distinguished Public Service Medal and the Public Welfare Medal from the U.S. National Academy of Sciences.

His 2017 book, Astrophysics for People in a Hurry, debuted at #1 on The New York Times Non-Fiction Best Seller list.