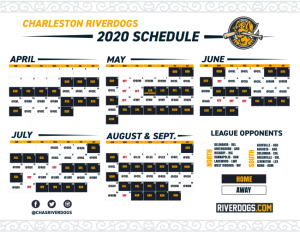 The Charleston RiverDogs in conjunction with the South Atlantic League have announced their schedule for 2020, the 24th season of baseball at Joe Riley Park.
Charleston will open their campaign at home for the first time since 2017 when they welcome the Kannapolis Intimidators to Riley Park on April 9, kicking off a seven-day stint at The Joe to open the season.
The Holy City’s Opening Day will mark the first of 11 Budweiser Thirsty Thursday home dates; the Dogs will play 11 games apiece each weekend day during the season, marking the dates of each Boeing Red Shirt Friday with postgame fireworks and Holy City Family Sundays presented by MUSC Health.
Other notable home dates on the calendar include a July 4 tilt with Greenville and a Memorial Day matchup with Columbia on Monday, May 25.
The RiverDogs will travel 9,400 miles over the course of the 140-game slate. Nearby North Augusta, the home of the GreenJackets, will be the Dogs’ most common destination with 14 contests scheduled to be played at SRP Park on the year, followed by Greenville (10), and Columbia and Rome (9 each). Charleston will face the division rival GreenJackets 25 times by the end of the year, their most common foe, while taking on the Drive 22 times along with Asheville and Rome 16 times apiece. Greenville will be the most common visitor to Riley Park next year with 12 games scheduled at The Joe in the Yankees-Red Sox matchup.
Charleston faces every team in the league either home or road expect for Hagerstown (Nationals), whom the RiverDogs will not see for a second consecutive season. Every team other than the Suns has at least one visit to Riley Park next year. The Dogs will travel to every road city in the SAL circuit save for Salisbury, Maryland, home of the Shorebirds (Orioles), and Hagerstown.
Game times for the 2020 schedule will be announced in February leading up to the season, along with a list of upcoming nightly promotions.
Fans can “Make Fun” with the RiverDogs all season long down at The Joe. Single-game tickets, including options to the Riley Park Club, are now available at riverdogs.com/tickets or by contacting the RiverDogs front office at 843-577-3647 (DOGS). A full schedule and list of game times for the 2019 season are available at riverdogs.com.