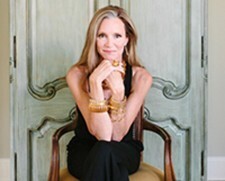 Nearly three decades removed from graduating from the University of Georgia with a degree in journalism, Julie Rogers spent her formative years as a model, working in radio, marrying, raising a family, before finally settling in on her passion which is historic restoration and home construction, including remodeling and design.

Born and raised in Atlanta, Rogers and her husband Curt (a Charlotte native) found their way to Charleston 20 years ago, enticed as many are by the history, ambiance, and beauty of the low country. The couple own and operate The Fielding Group LLC, a quality home and commercial construction company built on three core principles, ‘quality, value, and integrity’.

What drew Rogers to Charleston was a sense of community. “I only visited a few times but I could feel something drawing us here. Of course I had friends here, mostly from Georgia and several from UGA. I really loved how passionate all of them were about Charleston. We had lived in Tampa and Wilmington, but were looking to move to somewhere that was experiencing growth. More important to me, being from the south, it’s all about family. I like roots. Charleston has a certain lifestyle that’s easy to adopt, and of course we had to be on the water.” The Rogers family settled on Johns Island.

With her many years in various aspects of construction, Rogers didn’t hesitate several months ago when a fellow Georgia grad and family friend Lawrence Greenspon, suggested she be the host of a new show he was producing. On April 13th of this year the very first episode of Charleston Home Showcase made its debut on Live 5 WCSC. With a coveted 7:30pm Saturday night time slot, the debut show according to Rogers had a strong lead in following an exciting 2019 Masters weekend airing. 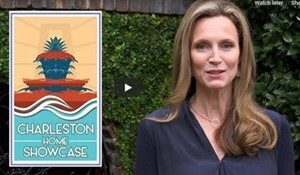 “I’m not a golfer or particularly a follower or golf, but Tiger Woods gave us a nice boost when our first show aired. He was playing great on the weekend and with the tournament on CBS it was a great lead in to our first ever episode. I think we reached over 50K viewers which is considered good, so I’m happy about that.”

Greenspon and the Rogers’ have been friends for a long time, so when he came looking for a host Julie was his obvious choice. “We’ve known each other since college. We met at UGA. Of course he and my husband have been friends since childhood. Like my husband, Lawrence is originally from Charlotte.”

Rogers adds, “So he being a media guy, he spent some time in Chicago before moving back to the south. He spent summers in Charleston and said ‘what’s going on with this little city’. Why is no one talking about it. In Chicago he did a similar show but it was more centered around real estate. He came up with this idea for the show, which dealt more from the contracting end. Me being in construction and design, and having been a model and spokesperson, he naturally thought I was an ideal fit to host the show.”

It didn’t take Rogers long to decide to jump on board the project. “It’s like the light switch came on. It was left or right blinker, which way do you want me to go. Hosting the show truly is the culmination of everything I’ve worked on my entire life.”

She describes the show as, “It’s like HGTV (Home & Garden TV) low country style. It covers the entire industry. It’s all about home and lifestyle. Really we’re a ‘who done it low country style’. On our shows you’ll discover ‘who to go to’, ‘who did it’, ‘the process of how they did it’, and ‘who I need to go to’, when I need work done on my house. From foundations, walls, electrical, indoor, outdoor, windows, gardening, pools, and more., Anything and everything to do with a home, hopefully you’ll see it on our show.”

Rogers says Curt is multi-faceted, whereas she focuses on specific areas. “My husband is a GC (general contractor), licensed in three states. He can do it all. I concentrate on a few areas, but I really love historic renovation.” Rogers is quick to note she’s not necessarily an interior designer. “I’m more of a space planner if you’re being technical about it. When it comes to the design of a space, I bridge the architect, contractor, and the home owner together.”

She adds, “When the customer needs to choose baseboards, flooring, countertops, where do I put the outlets in my house. Hundreds of decisions go at a homeowner, and sometimes they get overwhelmed. I’m more of the bones of a project. I get involved early on, but even more so when it comes out of the ground. What I do is more of a niche, but I love it.”

It’s not uncommon for Rogers to get involved on a project at the onset. “I start from the beginning. When the sticks are in the ground and the building is going up I’m getting involved. I know where the AC register is going to go. I know a particular piece of furniture the client is bringing from Chicago needs to fit this space. My preference is historic restoration, so usually an architect is not necessarily involved. It’s more engineers. And my overall passion is kitchens and baths.”

Charleston Home Showcase committed to a 52 week schedule, but the show does not produce a new segment every week. “The same show airs four times a month. Sometimes we’ll rotate the segments in a particular show to give it a different look, but primarily it’s the same content for the same four Saturdays during that month.”

Rogers says that allows the companies being profiled on the show to capture a bigger audience, but is quick to note they aren’t sponsors. “We prefer to call them partners. They help offset the cost of production. On the upside for them they get quality exposure on the show, much like getting extended advertising time.”

Like any TV show, Charleston Home Showcase cost to produce and air on television. “We use the Raycom group out of Charlotte. They used to own Channel 5 which is now owned by Gray Television (Atlanta based). So when we shoot a show we have to bring them down from Charlotte and put them up, and of course there are other expenses. So again the partner companies we profile each week help us cover our costs.”

Just a few months in Rogers admits the show is holding its own in the ratings, but is far from profitable. “Hoping someday to make money on it. For right now let’s get a good product on the air. Maybe in 2020 our phones will ring and everything will be smooth and easy. Hopefully we’ll get to a point where we will not have to go out and convince people (partners) to be on. But we all feel it will happen if we commit to the quality of the show. Others will see us or hear about it, and want to profile what they do on the show.”

One of the short term goals for the production team is to be able to shoot two episodes a week to help cut costs. “My interviews with business owners are about 20 minutes, and we oftentimes travel from Kiawah to Daniel Island and back to Goose Creek. It might take over three days to shoot. Everything is very time consuming. If we could wrap two shows per week that would help. But the folks in Charlotte do a great job of editing and giving us a great final product.”

Rogers breaks down the flow of the show. “We have four partner per show. And we’ve intentionally shrunk the commercial time to allow for more content for the partners. Right now we have three 30 second spots twice during an episode. It gives the partners more face time. I do my bumps, an open and close segment, and that’s the show. It’s not cookie cutter by any means. Partners could have four or five minutes or as little as two per show.”

The only formula the show maintains is the quartet of backgrounds they profile weekly. “We have four pillars to each and every show. The first is industry where I ask engineers, architects, contractors, or home builders to be in one segment. Another one is home health which covers AC, home and mildew remediation, something along the those lines. Another area we want to focus on is education and history. We had the American College of Building Arts, the ACBA on, and the Preservation Society in episode three. We also have beauty and lifestyle profiled, and that can be a decorator or a pool company.”

According to Rogers the feedback is nothing but positive. “So far people really like it a lot. There is a hunger for what going on in this town, and hopefully we’re filling that void. The most important thing for us is to keep our roots while we grow. I lot of what we do is to help educate the viewers, and it’s important we don’t move to fast. Ideally if we can entice the viewer and educate them at the same time, I think we’ve accomplished what we set out to do.”

What she hopes the show will provide to viewers. “Definitely trying to educate on who to use when you need a project done, or when you need your house built, or garden redone. There are a lot of people doing trades whether they are licensed or not. Customers need to be wary of that. My research I do on each and every person that comes on the show can only help the public, because you have to know who to trust. That trust can lead a better product.”

Her overall summary for Charleston Home Showcase. “In a nutshell the show is about community and it stars the people that build, maintain, and beautify the community. How awesome is that.”

With Charleston experiencing such a growth spurt Rogers sees the significance of the show, which in turn she hopes will lead to longevity. “The growth of Charleston over the past several years, and the expected growth is crucial to the show. So many people are moving here or relocating, and that means construction of new homes, and remodeling.” 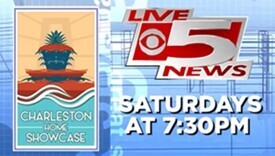 Her personal philosophy is one we all can rally behind. “We all have to live together. We don’t have to be neighbors, but we have to be neighborly. We should all strive to work together.” The Charleston Home Showcase airs weekly on Saturday nights beginning at 7:30pm on Channel 5 WCSC TV (CBS affiliate). “We’ve got that time locked in, so hopefully locals will tune in and see what we’re all about. I think they’ll be pleasantly surprised.”

Follow us
Related Topics:Charleston Home ShowcaseJulie Rogers
Up Next