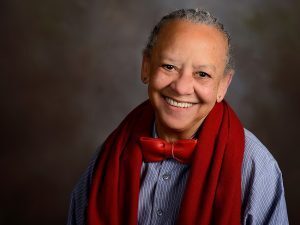 Nikki Giovanni, the world-renowned poet, writer, commentator, activist, and educator, will be featured as the keynote speaker at Black Ink, Charleston’s African American book festival. The festival, a program of the Charleston Friends of the Library. and a part of the MOJA Arts Festival, will take place on Saturday, October 5th at 2 pm in the Memminger Auditorium.

One of the most widely read American poets, Giovanni has written more than two dozen books, including volumes of poetry, illustrated children’s books, and three collections of essays. The Academy of American Poets voted Giovanni as the No. 1 poet for the spring of 2007.

Giovanni remains as determined and committed as ever to the fight for civil rights and equality. Always insisting on presenting the truth as she sees it, she has maintained a prominent place as a strong voice of the black community. Her focus is on the individual – specifically, the power one has to make a difference in oneself and in the lives of others. Her book Racism 101 includes bold, controversial essays about the situation of Americans on all sides of various race issues.

She has received 21 honorary doctorates and a host of other awards, including Woman of the Year titles from three different magazines and the Governors’ Awards in the Arts from both Tennessee and Virginia.

Rosa, her biography of legendary civil rights activist Rosa Parks, won Caldecott Honors and the Coretta Scott King Medal for best illustrated book. Three of her volumes of poetry – Love Poems, Blues: For All the Changes, and Quilting the Black-Eyed Pea – were winners of the NAACP Image Award in 1998, 2000, and 2003. Her 2009 collection, Bicycles: Love Poems, has been called one of her “most powerful offerings to date” by Essence magazine.

Her album Truth Is on Its Way, in which she reads her poetry against a background of gospel music, was a top 100 album and was named Best Spoken Word Album by the National Association of Radio and Television Announcers. The Nikki Giovanni Poetry Collection, a spoken-word CD, was a finalist for the 2003 Grammy Award in the category of spoken word.

“She’s one of the most noted poets in America today and an inspiration for many,” Jeanell Marvin, Director of the Charleston Friends of the Library, said. “Whether she’s reading her own works or talking about contemporary issues, Nikki Giovanni has something to say that we all should pay attention to.”

Reservations for the keynote address given by Nikki Giovanni can be made here.

In addition to Giovanni’s keynote address, Black Ink will feature dozens of African American authors, most from the Charleston area. They will display and sell books of poetry, fiction, nonfiction, memoir, inspiration, self-help, and titles for children and young adults. While author registration is currently filled, authors are encouraged to sign up for Black Ink at blackinkcharleston.org