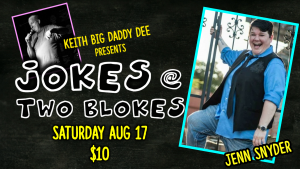 Looking for something new to do in Mount Pleasant? Look no further! On Saturday, August 17th, Two Blokes Brewing at 547 Long Point Road will host “Jokes at Two Blokes” with Jenn Snyder. The show will include hilarious standup comedy, tasty local beers, and a food truck.

The event’s headliner, Jenn Snyder, packs a whole lot of funny in her one-two punch style of comedy. She’ll pull you in with her stories and leave you wanting more with her quick wit and hilarious observations. Born and raised in Columbia, Snyder’s ultimate goal is to unite all people through laughter. She was the 2018 winner of the Soda City Comedy Competition.

The event’s host, Keith Dee, is a regular feature for the Comedy Zone World Wide, and recently featured for Jamie Kennedy and the legendary Emo Phillips. He’s been a performer in the Charleston Comedy Festival and The North Carolina Comedy Festival.