UPDATE – The event has been rescheduled to Wednesday, August 21st.

On , Tin Roof in West Ashley will celebrate the late Patrick Swayze’s Birthday with a party featuring food, activities, games, and more.

The event will include:

Swayze was an American actor, dancer, singer, and songwriter who was best known for his roles in movies like Dirty Dancing, Ghost, Road House, Red Dawn, Point Break, and To Wong Foo, Thanks for Everything, Julie Newmar. 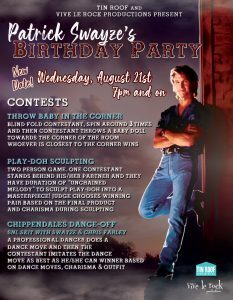